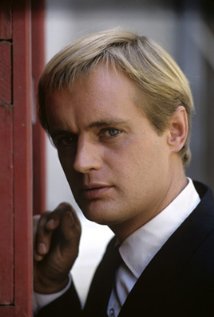 "This next one, a bit of a gem, and it's from a record which I've been sort of hoping, well not trying desperately hard to acquire, but you know, hoping that I would bump into, a copy of the LP or LPs in fact that David McCallum, the Man From UNCLE, Ilya Kuryakin, made at some stage of his career. There was a time, and you'll find this extraordinarily hard to believe, if you've ever seen a picture of your host here on BFBS, John Peel, that I used to look a bit like him, so much so that when I lived in Oklahoma City, I used to rather work at looking like him and was occasionally stopped in the street by young girls who'd say, "Are you that Ilya Kuryakin off the television?" Unfortunately, I never was: anyway, I'm very pleased to have got his LP, albeit a kind of compilation of the best of the two, perhaps three, I don't know how many vinyl LPs there were...it's great stuff." [1]

David Keith McCallum Jr. (1933- ) is a Scottish actor who has been active in that role since 1946, taking minor roles in British and American productions before finding fame in the spy thriller The Man From U.N.C.L.E., which ran on TV between 1964 and 1968. Unusually and daringly for a programme made at the height of the Cold War, McCallum depicted Ilya Kuryakin, a Russian secret agent who collaborated with Robert Vaughn on missions and became a hugely popular sex symbol in the process, with his blond hair cut in Beatles style.

It was during this period that he took the opportunity to capitalise on his classical training (his father was a violinist, his mother a cellist, and David learned to play the oboe at school and was at one time assistant stage manager of the Glyndebourne Opera Company) and released four LPs for Capitol. Most of the tracks were instrumental arrangements of current hits conducted by him, but McCallum added original compositions featuring his vocals, which exhibit offbeat stylings (My Carousel is taken at a strident shouting pace throughout). Surprisingly, Communication became a minor top 40 hit in the UK and The Edge has frequently been sampled by hip-hop artists.

McCallum continued to appear in film and on TV but struggled to recapture his 60s glory, until his role from 2003 in NCIS as Dr. Donald "Ducky" Mallard brought him renewed fame.

Peel was aware not only of McCallum's Man From U.N.C.L.E. persona (so much so that he attempted to copy his physical appearance with limited success) but was eager to possess copies of the LPs as part of his unceasing search for the esoteric in music, and was therefore delighted when Rev-Ola released a compilation of the long out of print material on CD in 1996. The album, named Open Channel D after one of U.N.C.L.E.'s catchphrases, included the sung tracks, at least three of which John appears to have played. However, it appears the fascination wore off after this initial rush of interest.

Retrieved from "https://peel.fandom.com/wiki/David_McCallum?oldid=103387"
Community content is available under CC-BY-SA unless otherwise noted.