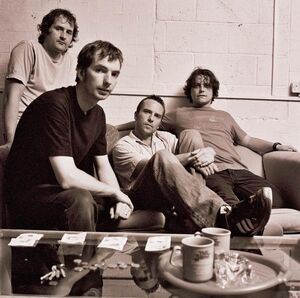 Decoration are an English indie band from Bolton founded in 2002 by Sam Noble (bass), Stuart Dickinson (guitar), Steve Taylor (drums) and Stuart Murray (vocals). The band have recorded four albums and six singles to date. The band were a favourite of John Peel, who played their demos on his show. Huw Stephens, the BBC Radio One presenter also liked the band and invited them to record a session for his One Music Show in 2005. Steve Lamacq made their track I tried it, I liked it, I loved it his single of the week when it was released in 2005.

After a lengthy absence, the group released the LP 'Put Me Back On My Bike' in 2014.

Discovered and championed by John Peel in early 2004, Decoration made their Radio One debut with Joy Adamson a song from the band's first demo The Thomas Pink Session. Impressed by their initial efforts, Peel phoned the band personally and invited them down to Maida Vale Studios in London to record a Peel session. The session was aired a month later, creating a buzz among music fans and industry alike. As interest in the band grew, Decoration produced a second demo that Peel also began playing, containing what would later become the band's first official single I tried it, I liked it, I loved it. The demo caught the attention of Edinburgh-based label SL Records, also home to Peel favorites Ballboy at the time, who later signed them.

Note: The correct title of the first song is actually "Pine". It was announced as "Pink" by Peel when broadcast and this detail is replicated in Ken Garner's "In Session Tonight". Presumably the error was made at the time of the session's recording.

Retrieved from "https://peel.fandom.com/wiki/Decoration?oldid=131012"
Community content is available under CC-BY-SA unless otherwise noted.