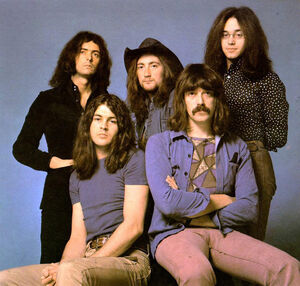 Deep Purple are an English rock band formed in Hertford in 1968. They are considered to be among the pioneers of heavy metal and modern hard rock, although their musical approach changed over the years. Originally formed as a progressive rock band, the band's sound shifted to hard rock in 1970. Deep Purple, together with Led Zeppelin and Black Sabbath, have been referred to as the "unholy trinity of British hard rock and heavy metal in the early to mid-Seventies". They were listed in the 1975 Guinness Book of World Records as "the globe's loudest band" for a 1972 concert at London's Rainbow Theatre,and have sold over 100 million albums worldwide, including 8 million certified units in the US. The band has gone through many line-up changes and an eight-year hiatus (1976–1984). The 1968–1976 line-ups are commonly labelled Mark I, II, III and IV. Their second and most commercially successful line-up featured Ian Gillan (vocals), Jon Lord (organ), Roger Glover (bass), Ian Paice (drums), and Ritchie Blackmore (guitar). This line-up was active from 1969 to 1973, and was revived from 1984 to 1989, and again from 1992 to 1993. The band achieved more modest success in the intervening periods between 1968 and 1969 with the line-up including Rod Evans (vocals) and Nick Simper (bass, backing vocals), between 1974 and 1976 (Tommy Bolin replacing Blackmore in 1975) with the line-up including David Coverdale (vocals) and Glenn Hughes (bass, vocals), and between 1989 and 1992 with the line-up including Joe Lynn Turner (vocals). The band's line-up (currently featuring Ian Gillan, and guitarist Steve Morse from 1994) has been much more stable in recent years, although organist Jon Lord's retirement from the band in 2002 and his death in 2012 (being succeeded by Don Airey) left Ian Paice as the only original Deep Purple member still in the band.

Deep Purple's debut radio session, presented by Peel, went out on his Top Gear show as early as June 1968, some weeks before even their debut single was released. Based on their performance on the show the verdict of BBC Radio One's selection panel was "enthusiastic, unanimous pass, polished commercial group," which ensured further, important BBC airplay for the band in their early years. However, Peel was disappointed with their second album, released in 1969, The Book of Taliesyn, and is alleged to have said:

"The group have done some fine things for Radio One and they excite when they play live. I don't understand where this record went wrong, it is all too restrained somehow. They recorded "Wring That Neck" much better for a recent Top Gear." [1]

Some kind of breaking point for Peel seemed to be reached when Purple performed Concerto for Group and Orchestra with The Royal Philharmonic Orchestra at the Royal Albert Hall in September 1969, with a subsequent vinyl release in December 1969. In a later interview, the DJ recalled:

"Concerto was, quite simply, spectacularly awful. And the worst thing is, I thought it was crap then, too. People say, 'Oh, you used to play a lot of Purple on Top Gear,' which I did. But when they brought in an orchestra, I bailed out." [1]

Even so, in 1970, when Deep Purple performed at the BBC Studios in London after the band stepped in at the last minute for Joe Cocker, who cancelled his scheduled appearance, Peel, who was presenting the concert show, was impressed with their sound:

However, in a Melody Maker "Reaction" article (November 14, 1970), when Deep Purple was mentioned, he commented:

"Ah, yes, a very successful band. I don't know them all but I've spoken to Jon Lord and he seems a nice guy. They are shrewd and will probably remain successful for some time. Obviously publicity conscious, but there's nothing wrong with that. They seem to be trying to create a controversy where no controversy exists. A lot of groups play formula rock and Deep Purple do it admirably. I just happen to be one of those jaded people who like to hear the unexpected. That's why I like Led Zeppelin and not Deep Purple. Zeppelin had the courage to do something different from what their fans expected. They could quite easily have made their third album "Son Of Whole Lotta Love"".

On another occasion, in an interview with the underground paper Friends (issue 26, March 22 1971, p.20) he compared them unfavourably to Doris Day;

"But it's still the children of the same people who are doing the manipulation, so to my mind a group like Deep Purple are as much show-biz as, say, Doris Day. But Doris Day owns up to it...."

By 1971 Peel was getting bored with the sounds of bands such as Deep Purple, Black Sabbath, ELP and Ten Years After. In a Melody Maker interview with Michael Watts (quoted by Ken Garner, The Peel Sessions, BBC, 2007, p75), Peel explained:

"Those bands have lost the spark somewhere down the line and are basically going through a routine... we're going through a very sterile period... the one distinguishing feature of Progressive music with a capital "P" is that under no circumstances should it progress an inch, because if it does people don't want to know."

By the mid-70s, although many of Peel's listeners were still eager to listen to Deep Purple, Peel was reluctant to play the band. On the 1976 Festive Fifty, listeners voted Child In Time at number 25, Peel responded by stating:

When punk arrived on the scene in the late 70's, Peel removed many hard rock and prog acts from his playlists and rarely played any of Deep Purple's material again.

Retrieved from "https://peel.fandom.com/wiki/Deep_Purple?oldid=216097"
Community content is available under CC-BY-SA unless otherwise noted.