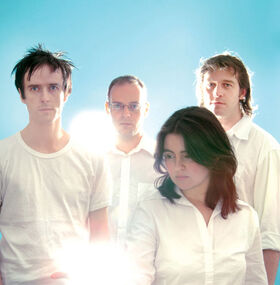 The Delgados were a Scottish indie group formed in Motherwell, North Lanarkshire in 1995 after several of the members had been sacked from another local band, Bubblegum. Naming themselves after the cyclist Pedro Delgado, the group recorded a series of singles in widely varying styles for over 10 years, They also put out five studio LPs and one live album that showed their collective strengths as vocalists, instrumentalists and songwriters, with The Great Eastern (2000) being nominated for a Mercury Music Prize (losing out to Badly Drawn Boy). They began their own label, Chemikal Underground, to distribute their work (and that of other Scottish acts such as Arab Strap and Mogwai). However, their prolific output did not translate into commercial success, with none of their singles making the UK top 40 chart, and in 2005 they split after bassist Stewart Henderson left due to their lack of critical attention. The remaining four members continue to run their label and Emma Pollock and Alun Woodward have separate music careers.

Allmusic claims they "were in many respects the true epicenter of the contemporary Scottish pop renaissance." Their songs "rank among the most sublime pop experiences in recent memory, blossoming from the lo-fi simplicity of their earliest work to an increasingly ambitious palette defined by achingly beautiful melodies, soaring string arrangements, and intricate waltztime rhythms." [1] Their collective writing ranged from the all-out punk force of Under Canvas Under Wraps to lyrical mood pieces that recalled the late 60s singer/songwriter era, Pull The Wires From The Wall, and they contributed to music by helping to kickstart several vital careers (even leaving their label almost broke by financing a Bis single). Their website states: "Our aspirations for (Chemikal Underground) when we started out were modest but ambitious all the same. That the label continues to release great music after sixteen years is a real source of pride, even if it is tempered with considerable disbelief." [2]

John was alerted to the band from their very first release, Monica Webster, which he began to play in January 1995, and from then every new release was guaranteed airplay on his show. They recorded eight sessions (all of which were released on The Complete BBC Sessions in 2006), of which John particularly commended them on the fifth, as all of the songs were cover versions. They had seven live sets aired on the show, and hit the Festive Fifty twelve times during Peel's lifetime (and had a further three entries afterwards). One of their songs, recorded for Peel before its official release (Pull The Wires From The Wall), hit the chart three times: once in its BBC version and twice on record, reaching number 1 in the 1998 Festive Fifty. It was even featured in the Peelenium 1997, meaning that Peel's listeners got to hear it in two different charts in the same programme.

The group quickly became assimilated into the fabric of John's musical universe. They played at Peel Acres in John's garden for Sheila's 50th birthday and the following year took JP to a pub quiz in Motherwell during Sounds Of The Suburbs. Shortly after his death. Alun said:

"John was a great guy. So much of the music that I have heard, I have heard it first on John Peel’s show. He is totally irreplaceable. It’s sad that he died for so many reasons." [3]

Eight sessions. All were released on The Complete Peel Sessions (Chemikal Underground, 2006).

6. Recorded 15-09-02. First broadcast 16 October 2002. Repeated? (A session of cover versions, a concept of which Peel firmly approved: "When these programmes started back in the reign of George IV, one of the ideas behind these sessions was that people should come in and do stuff which they might not normally do, whether it was the numbers that they played during soundchecks and things, or stuff that they were working on, or acoustic versions of tracks from the forthcoming LP. Rather than just coming on and doing fairly accurate covers of things that were going to be on the next record that they put out. So congratulations to and thanks to the Delgados for coming on and doing a whole series of covers for us.")

(JP: “While that was going on [the FF#3], the studio filled with merrymakers, people playing pool and opening bottles of champagne, including one that was given to us by the Delgados.”)