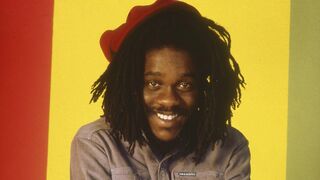 Dennis Emmanuel Brown (1 February 1957 – 1 July 1999) was a Jamaican reggae singer. During his prolific career, which began in the late 1960s when he was aged eleven, he recorded more than 75 albums and was one of the major stars of lovers rock, a subgenre of reggae. Bob Marley cited Brown as his favourite singer, dubbing him "The Crown Prince of Reggae", and Brown would prove influential on future generations of reggae singers. AllMusic describe him as "a soulful and thrilling but often troubled roots reggae singer and master of lovers rock."

In 1972, Brown began an association that would result in his breakthrough as an internationally successful artist; He was asked by Joe Gibbs to record an album for him, and one of the tracks recorded as a result, "Money in my Pocket", was a hit with UK reggae audiences and quickly became a favourite of his live performances. (This original version of "Money in my Pocket" was in fact produced by Winston "Niney" Holness on behalf of Gibbs, with musical backing from the Soul Syndicate.) In the same year, Brown performed as part of a Christmas morning showcase in Toronto, Ontario, Canada, along with Delroy Wilson, Scotty, Errol Dunkley, and the Fabulous Flames, where he was billed as the "Boy Wonder of Jamaica" and was considered the star of the show in a local newspaper review. "Money"'s popularity in the UK was further cemented with the release of a deejay version, "A-So We Stay (Money in Hand)", credited to Big Youth and Dennis Brown, which outsold the original single and topped the Jamaican singles chart. Brown and Holness became close, even sharing a house in Pembroke Hall. [1] Brown followed this with another collaboration with Holness on "Westbound Train", which was the biggest Jamaican hit of summer 1973, and Brown's star status was confirmed when he was voted Jamaica's top male vocalist in a poll by Swing magazine the same year. Brown followed this success with "Cassandra" and "No More Will I Roam", and tracks such as "Africa" and "Love Jah", displaying Brown's Rastafari beliefs, became staples on London's sound system scene....(Read more)

JP played Brown's music continually until 1993, and in 1978 featured three tracks in one show from the Wolf & Leopards LP. However, Brown's death from a collapsed lung on 01 July 1999 was not commemorated by John, and plays in the noughties were scant. Dennis had a top 20 UK hit in 1979 with a re-release of Money In My Pocket (on the Lightning label, making him a stable mate of Althea & Donna) and lower rung entries with Love Has Found Its Way and Halfway Up Halfway Down in 1982: none of these appeared on John's shows (according to available track listings), possibly because he found them too commercial.

Retrieved from "https://peel.fandom.com/wiki/Dennis_Brown?oldid=230159"
Community content is available under CC-BY-SA unless otherwise noted.