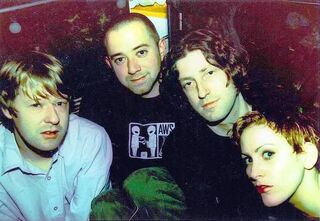 "Championed by both John Peel and Mark and Lard it seemed for a while, especially around the time of their radio hit Radar Intruder, that Ashley Cooke, Andy Fung, Dave Hirst and Mary Wycherley who made up the mighty Derrero came so damn close to breaking on through to a more widespread popularity. Over three albums and three e.ps Derrero grew to be glorious with their gorgeous melodies, wonderful production and seductive harmonies, culminating in the superb swansong Comb The Breaks before drifting apart. They are a band I have never tired of." [1]

The members of Derrero all met at Falmouth Art college in 1993: after studies, they evolved in Brighton before settling in Newport, Wales. There they released their debut single Tiny Shoes on Size 8 Records in 1997, also releasing their debut LP later that year, following this up with Small Pocket Machine and Radar Intruder. In addition to these releases, the band supported Gorky's Zygotic Mynci, Super Furry Animals and Sebadoh.

JP named Radar Intruder one of his favourite records of 1998, stating that had he made his own Festive Fifty for that year it would have reached a higher position than the 42 it actually achieved. He chose it as one of four for that year's Peelenium, and later averred that it was their best tune purely on the basis that it was the only one he could sing. In addition, the band's LP Comb The Creaks made it into both the May 2002 (Peel's Record Box) and July 2002 (Peel's Record Box).

Retrieved from "https://peel.fandom.com/wiki/Derrero?oldid=247517"
Community content is available under CC-BY-SA unless otherwise noted.