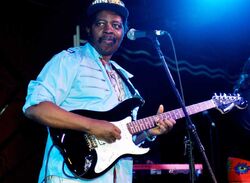 "Diblo Dibala, born in 1954 in Kisangani in the Congo (now Zaire), of the Baluba people, is one of the hottest African Soukous lead guitarists around. At the age of 6 Diblo moved to Kinshasa and by the age of 15 he was playing guitar in the great Franco's TPOK band. In Kinshasa, Diblo continued to master his lava-hot guitar chops with such top Zairean bands as Vox Africa, Orchestre Bella Mambo, and Bella Bella.
In 1979 Diblo left Zaire and landed in Brussels where he played a rented guitar and washed dishes to make money. In 1981 he moved to Paris, where the Soukous scene was a happening thing. He rejoined Kanda Bongo Man, who he had played with in Bella Bella. Their first album, Iyole (1981), was a big hit: Kanda became a big star, and Diblo became the most sought-after session man in Paris. Diblo's huge European success with Kanda Bongo Man led to the formation of his own band, Loketo (which means 'hips', as in 'shake your...'), featuring the work of the gifted vocalist Aurlus Mabele. By this time Diblo was the dominant Soukous session man in Paris and he was in great demand. On recordings by such Soukous giants as Kanda Bongo Man and Pepe Kalle you can hear them calling out "Diblo" when guitar solo time comes around. In 1990 Diblo left Loketo to form Matchatcha (which means "a type of flower that produces an itch")." (Janet Planet, The African Music Encyclopedia)

John and Andy Kershaw, on learning Diblo was making an appearance at Stern's African Records, raced there to get his autograph. [1] He repaid the compliment by giving name checks to both of them on 'Matchatcha Wetu.'

"Another gig that I've been to in the recent past, and one of the very best that I've been to in my entire life, featured Matchatcha with the guitar player Diblo Dibala from Paris. I'm not a dancing man, to be perfectly honest with you, cos I haven't really got the figure for it, but on this particular occasion I was dancing away like nobody's business, and the high point of the entire magical evening came when he played a new song from the new LP, called O.K. Madame, and the song is called Matchatcha Wetu, and what is particularly significant about this, and this is egotistical of me, I admit it in advance, but if you listen very carefully to this record, one minute and fifteen seconds into it, Diblo goes "Andy Kershaw" (that's the name of one of my colleagues at the radio station I work for in London), BBC, John Peela." You have to listen very carefully to catch it, but believe me, to hear Diblo singing your name on stage is one of the greatest things that's happened to me in my entire life." (Peel Out In The States (Program 07)

(JP: "And last Sunday night it was that Andy Kershaw and myself and a gang of other people including the Pig went along to Subterranea to see Diblo Dibala and Matchatcha... If I was to make a list of the ten best gigs that I have ever been to in my entire life, that would most assuredly be amongst them.")

(JP: 'I know it's an amazingly stupid thing to say that somebody is the best guitarist in the world, but if there is such a person it could well be Diblo Dibala, who's based in Paris, comes originally I think from Zaire. He used to be in a band called Loketo and the track I'm going to play you now features some of the most astonishing guitar playing I've ever heard in my entire life.')

Retrieved from "https://peel.fandom.com/wiki/Diblo_Dibala?oldid=239286"
Community content is available under CC-BY-SA unless otherwise noted.