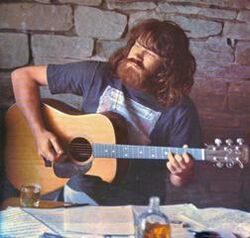 Gaughan was born in Glasgow's Rottenrow Maternity Hospital, when his father was working in Glasgow as an engine driver. He spent the first year-and-a-half of his life in Rutherglen, South Lanarkshire, after which the whole family moved to Leith, a port on the outskirts of Edinburgh. His mother was a Macdonald from Lochaber, and was a native speaker of Gaelic. As a child in the 1930s she won a silver medal at the Gaelic Mod. His father was born in Leith, and his paternal grandfather was an Irish speaker from County Mayo, who played the fiddle. The three children, of whom Dick was the eldest, grew up surrounded by the music of both Scotland and Ireland. The family experienced considerable poverty, which had a very strong influence on Gaughan's chosen path in life and his political views. (Read more at Wikipedia)

Despite the number of John Peel's Scottish Sessions over the course of his career, very little Scottish traditional music was played on his shows. This may have been because most performers of Scottish folk music had little appeal for Peel or his audience, from the polite, "drawing-room singing" of classically-trained singers like Moira Anderson and Kenneth McKellar to folksy entertainers like Andy Stewart, or middle-of-the-road folk groups like the Corries or the McCalmans. Many Scottish artists reacted against such interpretations of their country's music by avoiding folk altogether and embracing more modern musical influences.

Only in the 1970s did the Scottish folk revival produce performers who, following the example of their Irish contemporaries, developed a more musically interesting and modern take on folk music. Again, Peel didn't pay much attention to most of them, probably because this Scottish revival coincided with the rise of punk. But an exception was Dick Gaughan, who did three solo sessions for Peel between 1973 and 1977, as well as two as a member of The Boys Of The Lough in 1972 and 1973, and four as singer and guitarist with his group Five Hand Reel between 1975 and 1978. During this period, he was a favourite of Peel - who described him as "one of the five or six great voices of our time"[1]- sharing with the DJ both left-wing political sympathies and a love of football, but during the 1980s, he, like many other folk artists, appeared much less often in Peel's playlists. Instead, he became a firm favourite and regular session guest on the shows of Peel's friend and colleague Andy Kershaw. Dick Gaughan has also become a radio host, on the community station Black Diamond FM in Midlothian, and in 2013 participated in a John Peel tribute weekend in Hull.

Retrieved from "https://peel.fandom.com/wiki/Dick_Gaughan?oldid=234038"
Community content is available under CC-BY-SA unless otherwise noted.