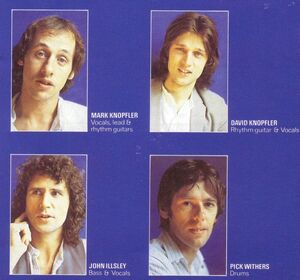 Dire Straits were a British rock band, formed in 1977 by Mark Knopfler (lead vocals and lead guitar), his younger brother David Knopfler (rhythm guitar and backing vocals), John Illsley (bass guitar and backing vocals), and Pick Withers (drums and percussion). Dire Straits' sound drew from a variety of musical influences, including jazz, folk, blues, and came closest to beat music within the context of rock and roll. Despite the prominence of punk rock during the band's early years, the band's stripped-down sound contrasted with punk, demonstrating a more "rootsy" influence that emerged from pub rock. Many of Dire Straits' compositions were melancholic. Dire Straits' biggest selling album, Brothers in Arms, has sold over 30 million copies. They also became one of the world's most commercially successful bands, with worldwide album sales of over 120 million. Dire Straits won numerous music awards during their career, including four Grammy Awards, three Brit Awards—winning Best British Group twice, and two MTV Video Music Awards.   According to the Guinness Book of British Hit Albums, Dire Straits have spent over 1,100 weeks on the UK albums chart, ranking fifth all-time. Their career spanned a combined total of 15 years. They originally split up in 1988, but reformed in 1991, and disbanded for good in 1995 when Mark Knopfler launched his career full-time as a solo artist. There were several changes in personnel over both periods, leaving Mark Knopfler and John Illsley as the only two original bandmates who had remained throughout the band's career.

Peel was originally a fan of the group, with especially a soft touch for their track Sultans of Swing, which Sheila Ravenscroft (Peel's wife) mentioned in Peel's autobiography Margrave of the Marshes (page 364), when they were travelling to Niagara Falls in 1978:

"It might dent this reputation to reveal this, but John had a soft spot for the Dire Straits song 'Sultans Of Swing', and we both sang it at the top of our voices when we were driving to Niagra Falls."

Although in a strange coincidence, while at Niagara Falls, Peel met the band, when one of the group members approached Peel to know whether it was really him. From Margrave of the Marshes (page 364/365), Sheila mentioned the story:

"There had been nothing but rubbish on the radio all the way from Toronto airport, so we were both pathetically grateful when Dire Straits came on, since it was the only thing we could sing along to. After seeing the falls, we stopped at the cafe nearby, where John was slightly unnerved to find a gang of men staring at us. We tried to carry on drinking our coffee, and pretended not to notice them, but it was hard to shake the suspicion that we were about to be robbed and murdered and dumped in the falls where no one would ever find our bodies. Then one of the men approached John. 'John Peel?' he said. 'You are John Peel, aren't you?' John had to admit it was so. 'We thought it was you! We're Dire Straits.' And what nice lads they were too. We had a drink and a chat with them and concluded that they were not at all the sort of people who would have robbed and murdered us before dumping our bodies in the falls."

Over the years, Peel started to dislike their music and called them predictable and too safe. When talking to John Walters on Peeling Back The Years 4 (Transcript) in 1987 he mentioned that punk saved music and that he was grateful not to have Dire Straits perform a session for his show:

"That’s what I really like more than anything else, the element of surprise. And if it hadn’t been for punk, we certainly wouldn’t have had that. And the fact that I think we were right when we didn’t have Dire Straits"

In an interview with Sue Lawley for Desert Island Discs in 1990, he confirmed that he turned down the group for a session on his show. Through out the years, he sarcastically used the band's name when he thought a particular music group on 28 October 1985 such as 10,000 Maniacs was going too commercial or when his show on 20 June 1992 was being taken away for 13 minutes by the band's concert:

"I tell you what, it's been an honour to lose 13 minutes of the programme as a result of the marvellous music we've heard tonight on One FM from Dire Straits. I wish they could have kept going all night."

(The following list was compiled only from the database of this site, Lorcan's Tracklistings Archive and Ken Garner's Peel Sessions (pg220), and is certainly incomplete. Please add further details if known.)

Retrieved from "https://peel.fandom.com/wiki/Dire_Straits?oldid=162336"
Community content is available under CC-BY-SA unless otherwise noted.