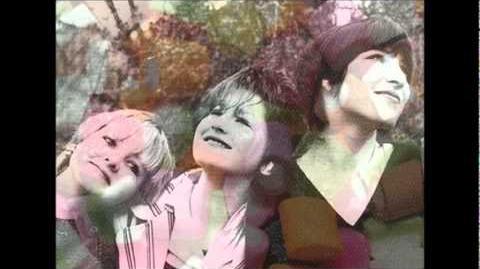 Dolly Mixture (never The Dollymixtures nor Dolly Mixtures) were a punk band that showed that the get up and do it yourself ethos reached out of London and it wasn't just about fast three chord thrash. It was an attitude.

Debsey Wykes, Rachel Bor and Hester Smith were three school friends from Cambridge with a love for music who, inspired by punk, thought they'd give the music business a run for its money. For six years they played to enthusiastic audiences (including John Peel on at least two occasions [1][2]) and even had a number one hit as Captain Sensible's backing band on his surreal number one hit reprise of Happy Talk.

Their Peel session was secured early in their career and in the film Take Three Girls, produced, directed and edited by Paul Kelly, they remember the excitement with which they recorded the session. In the booklet that accompanies the CD reissue of their one and only album, The Demonstration Tapes, Bob Stanley states that this was recorded after Peel had booked them for a Road Show. He wrote: "The BBC Engineer encouraged them to put more bollocks into it."  Bob Stanley also says Dale Griffin was a fan but he didn't produce the session - that honour went to Bernie Andrews. Walters was less keen, reportedly calling them a cross between the Nolans and the Slits!

They thought that with a John Peel session in the bag they had really made it. A single for Chrysalis followed the next year. John Peel reviewed it on Radio 1's Roundtable. He wasn't complementary and Dolly Mixture agreed - the record company had advised them to be poppier than they wished. It was produced by Bay City Roller's Eric Faulkner! Peel didn't like the B side either which was a cover of Shirelles/Bacharach tune "Baby Its You". Peel advised them to stick to recording their own material. He continued to play their singles. They continued to tour. They had supported The Undertones on one of their first big UK tour and U2 supported them. They also supported The Jam and Paul Weller liked what he heard. Their second single was the first release on Paul Weller's Respond label. Their third was Resp4.

They gigged a lot and many of Peel's loyal band of listeners saw them up and down the country. Paul Weller lost interest in Respond and without a record deal they self-released a collection of their studio recordings as a double album white label in a limited edition of 2000 (probably because they couldn't afford to press any more!) signed by hand and with a photocopied tracklisting. Punk.

Dolly Mixture called it a day when Rachel, who was going out with the Captain, got pregnant with his child. Hester retired. Debsey and Rachel played in various bands but fame still eluded them!

Some people credit them with being an influence on Riot Grrrl and they are still remembered fondly around the world, oddly particularly in Japan. A singer called Kahimi Karie covering a late song of theirs ([3]), and a label released some lost treasures in 1998 ([4]).

Bob Stanley of Saint Etienne was a big fan (Debsey sang on some of Saint Etienne's greatest tunes) and as well as writing the booklet for the CD reissue of the Demonstration tapes he put Paul Kelly's film on at the Barbican as part of his Pop Maverick's season in 2008. Paul Kelly (Debsey's partner, co-collaborator in a band called Birdie and occasional member of Saint Etienne) used an unreleased documentary made about the band at the time, cut together with interviews, and memorabilia. At the Barbican showing Paul, Debsey, and Rachel (plus Captain's and her grown up son!) did a question and answer session afterwards. "Take Three Girls (The Dolly Mixture Story)" (2008) not only captures the spirit and energy of the band but it reveals what it was like to be in a band in post-punk Britain.

One session. No known commercial release. Unusually had six (short and sweet) songs. Including their introductory theme song they used to play at gigs and a cover of The Locomotion. These tracks are not available elsewhere and give a real sense of their early style and energy

Dolly Mixture also provided backing vocals for a Captain Sensible session for Kid Jensen's show. Recorded on 29 November 1982, the Captain played the motorbike as well as bass guitar. 'Happy Talk' was recorded during this sessions and this version is available on the Band of Joy's double CD released to celebrate 25 years of Radio 1:One and Only - 25 Years of Radio One.

(The following list is complied only from the database of this site. Please add more information if known.)