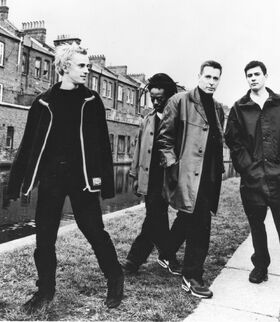 Dreadzone are a British band whose music is an eclectic fusion of dub, reggae, techno, folk and rock. Dreadzone formed in Portsmouth in 1993 when ex-Big Audio Dynamite drummer, Greg Roberts, teamed up with Tim Bran, who had previously worked as a musician and sound engineer for Julian Cope. The name Dreadzone was suggested to Roberts and Bran by Don Letts. Bran and Roberts were soon joined by bassist Leo Williams and keyboardist Dan Donovan, also formerly of Big Audio Dynamite. The band signed to Creation Records in 1993 and released their first album 360°. The following year the band signed to Virgin Records and released their second studio album Second Light. In the meantime, Dreadzone had become a favourite festival act and in June that year opened the Pyramid Stage at Glastonbury Festival ... (read more at Wikipedia)

Dreadzone recorded three sessions for Kat's Karavan, with a fourth for Keeping It Peel night featuring a solo DJ mix from Tim Bran. The second was taped during the Second Light sessions and featured a live favourite, Maximum, that the band claimed was performed in a single take (in The Peel Sessions, Ken Garner highlights this set as a Classic Session on p. 146).

The band had six Festive Fifty entries, all in the same chart, and had it not been for Pulp would have dominated the chart that year: Mark Whitby claims that the album all those tracks came from, Second Light, "must rank as one of he most significant of all albums in Festive Fifty terms, if only because of its achievement of helping to bring so much diversity to the 1995 chart, and showcasing the variety of musical possibilities that fed out from the pulsing heart of dub reggae" [1] Peel labelled it a masterpiece and one of his all-time favourites [2] Whitby also notes that Zion Youth was the most successful reggae-based track in the chart's history, and it was subsequently chosen for the Peelenium 1995. In January of the following year, Little Britain became the band's only UK chart entry, reaching number 20.

Drummer Greg Roberts said of Peel in a 2013 interview:

"He was a down-to-earth character – you could talk to him really easily, you didn’t feel star stuck around him – with a genuine interest in music, all kinds of music. He was an antidote to all the cheesy Smashie and Nicey types in there and he played an important role and he’s been missed ever since – everything you wouldn’t usually hear on the radio is given an airing....he shone a light on us." [2]

2. Recorded 1994-08-21. First broadcast: 24 September 1994. Repeated: 12 August 1995. (JP: 'I've been looking forward to both of our sessions, but one of them in particular, since a morning, I was going to say a chill morning but that would be exaggerating I think, and romanticising slightly, but at the Glastonbury Festival earlier this year, when I stood on stage along with Kershaw and we watched Dreadzone. Not a great number of people there in the front of the stage, but those who were there will have seen one of the great sets, I think. It was wonderful, I thought.')

Retrieved from "https://peel.fandom.com/wiki/Dreadzone?oldid=232313"
Community content is available under CC-BY-SA unless otherwise noted.