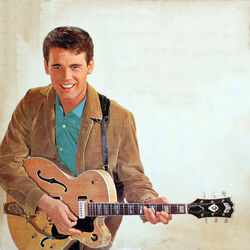 "I have never met Duane Eddy but he remains one of my greatest heroes. At times of stress our home throbs to his 'Hard Times', 'Movin N' Groovin' or 'Three-30-Blues'. " (Duane Eddy: More New Numbers, Less Old Hat, Independent On Sunday, 8 April 1990, as reprinted in Olivetti Chronicles, Corgi edition, p.96).

Duane Eddy (1938- ) is a guitarist from New York with a distinctive and much copied 'twangy' sound, produced by playing lead on a guitar's bass strings. allmusic.com claim that he was prehaps the most successful instrumental rocker of his time and arguably shares credit with Chuck Berry for popularising the electric guitar on pop records. His LP The Twang's The Thang gave JP a ready-made catchphrase, and he has had equal chart success in the US and USA with a succession of memorable instrumentals, including Movin' N' Groovin and Rebel Rouser (both 1958), Forty Miles Of Bad Road, Because They're Young (long used as Johnnie Walker's theme tune) and most famously Peter Gunn. The latter, in a duet with the Art Of Noise, became a worldwide hit in 1986 many years after the original and introduced Eddy to a new audience. 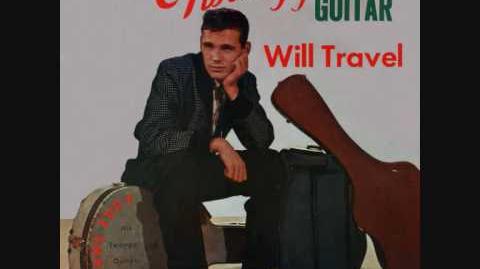 JP's introduction to the man and his music appeared to be Rebel Rouser, which he claimed was a logical extension of the 'twangy' guitar in Jody Reynolds' Endless Sleep and the answer to his prayers. In Peeling Back The Years he chose Hard Times as an example of Eddy's work, but had also been terminally smitten with Peter Gunn, citing Duane's solo entry mid-record as one of the greatest moments in popular music. Indeed on 09 February 1981 he went further and claimed it to be the supreme achievement of the 20th century. As professed above, he found great solace in Eddy's style in general. However his later efforts in the wake of Gunn's latter-day success did not please him: 1987's Duane Eddy employed a star-studded line-up to, John felt, no good effect:

"When the LP was released it sold well but since first putting on my metaphorical wellingtons for a tentative tiptoe through the celebs, I have never listened to it again." [1]

He later expanded on this view:

"I'm a great admirer of the firmly and resolutely struck twangy guitar, and particularly of the work of Duane Eddy, the past work of him, but of course the most recent LP that he made is one of those things that I read about in the music papers: it said something like, "The good news: there's going to be a new Duane Eddy LP. The bad news is, George Harrison's written a song for it, and Eric Clapton's going to guest on it", and all this kind of stuff, and of course the consequent LP was just muck. I mean, it sold enormously well, but it was unlistenable, in my view. What I'd really like to happen is for someone to kind of kidnap him and take him into a studio, as they should have done with Elvis, frankly, kidnap him and take him into a studio somewhere and just make him do stuff in a simple, straightforward way, you know, without, "Hey! Let's put strings on this one, or let's get George to play sitar on this track," and all that, which is completely superfluous and obviously horrible really." [1]

Moreover, news of an impending tour (which nevertheless turned out better than Peel feared) did not impress:

"He's going to be touring Britain in April: I know he'll be awful because it'll be all kind of slushy stuff, you know, and he'll do one or two of the old hits put together as a medley played slightly too fast, and then after that, "Ladies and gentlemen, would you put your hands together for a great friend of mine, Mr. Eric Clapton!" It'll happen, it's bound to happen."' [2]

Cannonball Rag / Dance To The Guitar Man / The Lonely One

"Then, on the 29th of July, 74, I recorded Duane Eddy in Langham 1. Being a US citizen, he had come in as a self-accompanying musician, but was backed by a British band. He was booked for sessions for both Peel and one of the daytime Radio 1 shows. Duane Eddy was one of my boyhood heroes and, although many of the contemporary musicians that I worked with - some of whom subsequently became huge names - impressed me a great deal, there is something very special about meeting a childhood hero. Duane was initially very quiet, but when he realised that I was going to get him a good sound, and that I had no objection to him setting the equaliser on the channel controlling his guitar sound - he turned out to be a very friendly guy. The track I remember the most - one of my favourite Duane Eddy classics - was '(Dance With The) Guitar Man.' It sounded great! He also played a Chet Atkins-like number called 'Cannonball Rag' - all finger pickin' and down home! He really wanted to turn in a good performance on that one, and I got the impression that it was the kind of track that would impress his peers back home. It was certainly more musically accomplished than the hits he made famous in the '50s - but I was more excited by the twangy classics." (Bill Aitken, Inside The John Peel Sessions, Starry Eyed And Laughing.)

(JP: 'To be honest with you, I never was terrifically keen on this, but sometimes a man's gotta do what a man's gotta do...Duane was just fine, but those howling women I wasn't very keen on.')

Retrieved from "https://peel.fandom.com/wiki/Duane_Eddy?oldid=273238"
Community content is available under CC-BY-SA unless otherwise noted.