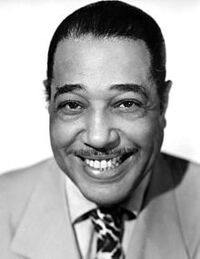 Edward Kennedy "Duke" Ellington (April 29, 1899 – May 24, 1974) was an American composer, pianist and bandleader of jazz orchestras. His career spanned over 50 years, leading his orchestra from 1923 until he died.

He is widely regarded as the most important jazz composer and bandleader, with some admirers even seeing him as America's greatest composer in any musical field, with a vast library of compositions, from pop songs to extended works. The sidemen in his band included many leading jazz soloists, and he influnced many younger performers, from Miles Davis and Charles Mingus to Stevie Wonder and Steely Dan. His career spanned a range of eras, from the !920s Jazz Age to the 1970s, and he performed in a variety of contexts, from Harlem's Cotton Club, where his band made its name with a residency in the late 1920s, to dance halls, jazz clubs, open-air festivals and concert halls. Overseas tours, sometimes supported by the US State Department, took his band all over the world, including performances in such improbable jazz venues as Iran and Afghanistan. He is the subject of numerous books, and a Wikipedia article which gives a full account of his long career.

Duke Ellington's music never appeared in John Peel's shows during the first dozen years of his time at the BBC, although it was frequently played by the broadcasters he admired, such as Humphrey Lyttleton, Peter Clayton and Alan Dell. At the time Ellington's following was largely middle-aged, and he was not fashionable among younger rock fans who, if they listened to jazz, usually preferred newer styles. However, from around 1980 Duke Ellington records began to feature fairly regularly in Peel's playlists, when he played vintage tracks to contrast with the new music which made up the bulk of his programmes.

Peel played tracks from various periods of Ellington's career, including well-known classics such as "Black and Tan Fantasy", "Creole Love Call" and "Mood Indigo", but he returned several times to "Skin Deep", famous as a feature for drummer Louie Bellson and originally issued on two sides of a 78 in 1952. The record made the British Top Ten chart in March 1954, so Peel would have heard it in his youth, as the same chart listing includes records by artists he recalled in later life - Frankie Laine ("Blowing Wild") and the Obernkirchen Children's Choir ("The Happy Wanderer").

Retrieved from "https://peel.fandom.com/wiki/Duke_Ellington?oldid=228562"
Community content is available under CC-BY-SA unless otherwise noted.