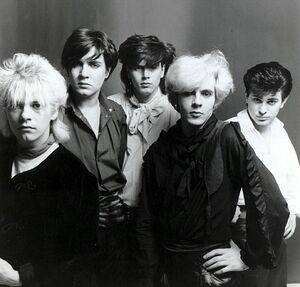 Duran Duran are an English pop band formed in Birmingham in 1978. They were one of the most successful bands of the 1980s and a leading band in the MTV-driven "Second British Invasion" of the United States. Since the 1980s, they have placed 14 singles in the Top 10 of the UK Singles Chart and 21 in the Billboard Hot 100, and according to the Sunday Mercury, they have sold more than 100 million records.  While they were generally considered part of the New Romantic scene along with bands such as Spandau Ballet when they first emerged, the band later shed this image. The band worked with fashion designers to build a sharp and elegant image. The band has won a number of awards throughout their career, including two Grammy Awards, two Brit Awards receiving the award for Outstanding Contribution to Music, an MTV Video Music Award for Lifetime Achievement, and were awarded a star on the Hollywood Walk of Fame. The group was formed by Nick Rhodes and John Taylor, with the later addition of Roger Taylor, and after numerous personnel changes, Andy Taylor and Simon Le Bon. So far the band have not disbanded, but the line-up has changed to include American guitarist Warren Cuccurullo from 1989 to 2001 and American drummer Sterling Campbell from 1989 to 1991. The reunion of the original five members in the early 2000s created a stir among the band's fans and music media. Andy Taylor left the band once again in mid-2006, and London guitarist Dom Brown has since been working with the band as a session player and touring member.

On his BBC Radio One show from 17 March 1995, Peel mentioned that someone had written to him claiming that he played Duran Duran's first single:

"The Duran Duran tune. First time I've ever said the word Duran Duran on the programme, I think, although somebody did once write and tell me I played their very first single: this could be the case."

Duran Duran's first single Planet Earth was a UK Top 20 hit single in 1981 [1]. Peel played this on 02 February 1981 having heard Dave Lee Travis play it on his car radio and being annoyed he got in there before him. He realised it was the sort of record he wasn't "meant" to play, but then said he was getting fed up with all of that (fashion conscious nonsense). He also played their second single Careless Memories on 28 April 1981 and the B side, a cover of David Bowie's 'Fame', on 05 May 1981. Apart from that there doesn't seem to be much evidence that he continued playing their material after the band achieved their first UK Top 10 single, Girls On Film. Exceptions were on 09 April 1993 (John Peel Is Jakki Brambles) when Peel was covering for Jakki Brambles while she was away. The compromise playlist included Duran Duran;'s single Come Undone. Additionally, Girls On Film was played on 15 July 2004 as a preview for the cover that Melys had recorded for their forthcoming session, which was broadcast on the next show.

(The list below is incomplete and compiled only from the database of this site. Please add further details if known.)

Retrieved from "https://peel.fandom.com/wiki/Duran_Duran?oldid=228638"
Community content is available under CC-BY-SA unless otherwise noted.