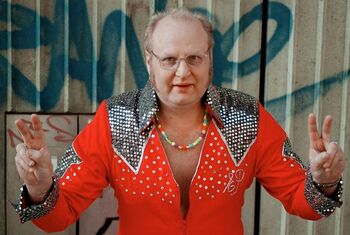 Eilert Pilarm (1953- ), born Eilert Dahlberg, is an Elvis Presley impersonator from Sweden. He first came to public notice on the TV programme Morgonpasset in 1992, and self-released several tapes (imaginatively titled Elvis I, II and III) before signing to the Green Pig Production label, which issued Greatest Hits in 1996 (in the same year, he realised a long-held ambition to visit Presley's former home at Gracelands).

As a performer of unusual Cover Versions of Elvis songs, Pilarm rapidly caught Peel's attention and thereafter he became something of a favourite. John frequently questioned whether the Swedish singer was aware of his idiosyncratic style or was happily oblivious of his off-key, hesitant and badly pronounced crooning. His version of 'Jailhouse Rock' was featured on Songs In The Key Of Z: The Curious Universe Of Outsider Music, alongside tracks by such luminaries as Joe Meek, Legendary Stardust Cowboy and Captain Beefheart.

(The listing below is researched only from the database of this site and Lorcan's Tracklistings Archive via Phil's Mighty Database. Please add more information if known.)

(JP: 'I hate myself for saying this, but do you think he knows? D'you know what I mean? I wonder (if) it's one of those things where it's actually some terrifically ironic Swedish person who speaks flawless English and can sing perfectly. If he does do it like that, if he really does know and does it deliberately, then he's an extraordinarily gifted man really, because it must be very very difficult to do.')

(JP: 'And in next week's John Peel's Music From BFBS, Eilert does Long Tall Sally in a version of it so far removed from the original I'd say he had a good case for calling it his own composition.')

(JP: 'He's a lad, isn't he, though? Isn't he wonderful?...One hopes, of course, that Eilert is at this very moment working on a new LP: I look forward to it a great deal. Since I spoke to you last, a week ago here on BFBS, I've been contacted by no less than three different advertising agencies who are all anxious to use Eilert's music in some sort of campaign or other: I wish 'em well, I must admit, and I hope that Eilert becomes a great global star, which is obviously his wish. I'd like to see him, Dennis and I were just discussing this, I think Eilert Pilarm at the Albert Hall, I think one of those things to kind of yearn for, really.')

(JP: "He is majestic ... Some of the tracks at the end of this LP are actually Elvis songs done in Swedish, and I am looking forward to hearing those a great deal. I'm kind of rationing myself to one track a week, or perhaps two ... Anyway, great stuff, no question about it ... I can't wait to see Eilert. I'm trying to persuade people to book Eilert for some gigs, in London at least, so we can see the great man in person.")

Retrieved from "https://peel.fandom.com/wiki/Eilert_Pilarm?oldid=207267"
Community content is available under CC-BY-SA unless otherwise noted.