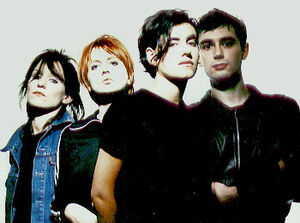 Elastica were an English alternative rock band that played punk rock, post punk and new wave-influenced music. They were best known for their 1995 album Elastica, which produced singles that charted in the United Kingdom and the United States. (Read more at Wikipedia)

Peel discovered the band in 1993 through the Deceptive label and the group did four sessions for his show. He also interviewed the band in 1994 during their Reading Festival appearance on his programme. The band became subject to controversy in their early career when Wire and The Stranglers sued them for plagiarism. Peel defended Elastica saying that many bands have used melodies from others. At the end, the disputes were resolved by out-of-court settlements.

(JP: 'Four tracks from what must be one of the most impressive debut LPs of the past few years. In fact, one of them is coming along now.)

Retrieved from "https://peel.fandom.com/wiki/Elastica?oldid=254821"
Community content is available under CC-BY-SA unless otherwise noted.