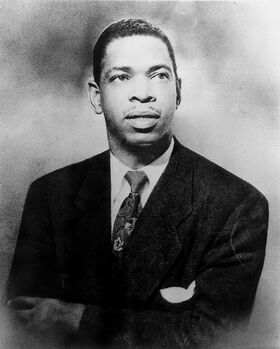 Elmore James (1918-1963) has been called "the most influential slide guitarist of the postwar period....Others may have had more technique....but Elmore had the sound and all the feeling." [1] His early death from heart failure prevented him from reaping the benefits of the mid to late 60s blues revival, when this music was rediscovered by a host of high profile artists such as Eric Clapton, Fleetwood Mac and John Mayall. He is most famous for his staccato slide riff on the Robert Johnson number Dust My Broom, of which the 1951 version is the most well-known, although he recorded it repeatedly up to the end of his life in a variety of styles.

A radio repairman by trade, he spent his free time customising his amps to produce a raw, distorted sound that was the genesis of heavy rock and metal from the late 60s onwards. Dust My Broom was secretly recorded at the end of a session where James backed Sonny Boy Williamson, and became a local R&B hit in 1951. This eventually led to his moving to Chicago where he recorded for several labels including the legendary Chess, and the outpouring of now classic material such as The Sky Is Crying. However, his career was repeatedly dogged by poor health and it was in Chicago that he suffered his final heart attack on May 24, 1963. His funeral was attended by over 400 stars of the blues genre, and he was later elected to both the Blues Foundation and Rock & Roll halls of fame.

"I had been driving for some time and it must have been two or three a.m. as I started through the richly forested area of East Texas known as the Piney Woods. There was little traffic on the roads and, as the road rose and fell through the trees and past tiny towns that were often barely more than a handful of bedraggled shacks, the moon, which shone brilliantly directly in front of me, turned the concrete to silver. I was listening, I imagine, to Wolfman Jack from XERB, over the border in Mexico, and as I came over the top of the hill to see another tiny town below me, he played Elmore James' 'Stranger Blues.' "I'm a stranger here, just drove in your town," Elmore sang, and I knew that I would never forget the perfect conjunction of place, mood and music. Nor have I." (Peel describing one of the great musical moments of his life, in Texas c. 1960, from Margrave Of The Marshes, Corgi edition, p. 192.)

That Peel held James in the highest of regard is axiomatic, judging solely by the number of plays listed below. His playing is bound up within the fabric of Peel's life, from providing him with a soundtrack to an unforgettable point in time (Stranger Blues, the story of hearing he claimed to have told an infinite number of times) to an instantly identifiable and universally popular noise (Dust My Broom, one of the selections for the Peelenium 1951). In fact, "Dust My Broom" became practically the unofficial anthem of the British blues boom of the late 1960s, with most blues bands of the era including it in their sets. In particular, Fleetwood Mac's earliest, blues-based records and Top Gear sessions provide evidence of Elmore James's influence, with singer-guitarist Jeremy Spencer a skilful mimic of James's style. Grinderswitch's "Pickin' The Blues", the theme tune for Peel's BBC shows from the early 1970s on, was a cover version of an instrumental James had recorded more than a decade earlier.

Peel even claimed for many years to have seen Elmore James live, but admitted in early 2000 and in the pages of Margrave that this was untrue (and highly unlikely, since in the time period Peel was talking about, James would have been shuttling back and forth between Chicago and Mississippi). A posthumous release coupling 'The Sky Is Crying' with a version of Johnson's 'Crossroads' turned up in John Peel's Record Box.

Retrieved from "https://peel.fandom.com/wiki/Elmore_James?oldid=243723"
Community content is available under CC-BY-SA unless otherwise noted.