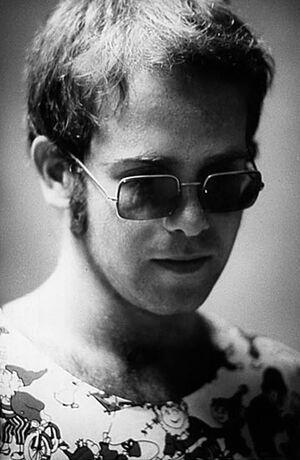 Sir Elton Hercules John CBE (born Reginald Kenneth Dwight on 25 March 1947) is an English singer-songwriter, composer, pianist, record producer, and occasional actor. He has worked with lyricist Bernie Taupin as his songwriter partner since 1967; they have collaborated on more than 30 albums to date.  In his five-decade career Elton John has sold more than 300 million records, making him one of the best-selling music artists in the world. Elton was inducted into the Rock and Roll Hall of Fame in 1994. Having been named a Commander of the Order of the British Empire in 1996, Elton received a knighthood from Queen Elizabeth II for "services to music and charitable services" in 1998. Elton has performed at a number of royal events, such as the funeral of Princess Diana at Westminster Abbey in 1997, the Party at the Palace in 2002 and the Queen's Diamond Jubilee Concert outside Buckingham Palace in 2012.  He has been heavily involved in the fight against AIDS since the late 1980's.  In 1992, he established the Elton John AIDS Foundation and a year later began hosting the annual Academy Award Party, which has since become one of the highest-profile Oscar parties in the Hollywood film industry. Since its inception, the foundation has raised over $200 million.  Elton entered into a civil partnership with David Furnish on 21 December 2005, the first day it was legally possible in England and Wales, and continues to be a champion for LGBT social movements worldwide and same-sex marriage.

Like Peel, Elton John was a music enthusiast with a love of records. In the early 1970s, just before his career took off, Elton had a Saturday job as a sales assistant in Musicland, Berwick Street, one of the London shops where Peel obtained new, imported American LPs. In an interview on Partners In Dispute in 1992, Peel described Elton John as a nice man, who sent him letters and books. He also described early Elton John's work along with Queen as radical, although the innovations they pioneered have subsequently become common practice. John recorded two Peel sessions, the first of them broadcast on Night Ride in November 1968, despite a seemingly disastrous trial appearance on Stuart Henry's show three weeks previously: the audition panel described him as having "a thin, piercing voice with no emotional appeal". [1] At the start of his solo career Elton John was strongly influenced by American singer-songwriters who were played on Peel's shows, such as David Ackles and Tim Buckley, so the fact that his first session went out on Night Ride rather than Top Gear seemed appropriate.

However, Elton John developed an extroverted stage act, which distinguished him from most other singer-songwriters of his era and greatly aided his rise to superstardom, especially in the U.S.. This side of Elton John came through on his 1973 second session recording, on which he played in "pub piano" style; Peel, John Walters and Teddy Warrick were heard singing along with Elton John in a drunken medley chorus of Daniel and Your Song. Walters recalled the recording of the session in an article for Radio Times ahead of the Elton John at the Beeb special programme, first broadcast on Radio 1 on 07 December 1985.[1]

"We trundled out of those cobwebby jangle pianos..., bought some light ales, and for the John Peel programme festive edition, Elton rattled off superbly insensitive knees-up versions of his work, pub standards, Christmas songs and even Bob Dylan. Do the record companies archives have this? One up to the Beeb, I think." [2]

Although finding him personally likeable, Peel showed no interest in his later material, but after Peel's death, Elton John appeared on the documentary John Peel's Record Box in 2005 and commended Peel for the work he had done for music.

Retrieved from "https://peel.fandom.com/wiki/Elton_John?oldid=233968"
Community content is available under CC-BY-SA unless otherwise noted.