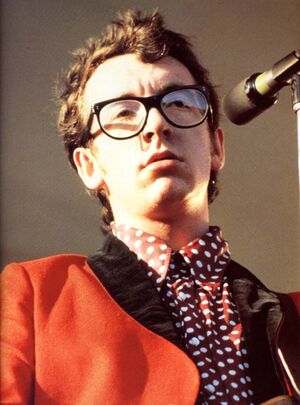 (This page covers Elvis Costello as a solo artist, with The Attractions, and as The Imposter)

Elvis Costello OBE (born Declan Patrick MacManus; 25 August 1954) is an English singer-songwriter. He began his career as part of London's pub rock scene in the early 1970s and later became associated with the first wave of the British Punk & New Wave movement of the mid-to-late 1970s. His critically acclaimed debut album, My Aim Is True, was recorded in 1976. Shortly after recording his first album he formed The Attractions as his backing band. His second album, This Year's Model, was released in 1978, and was ranked number 11 by Rolling Stone on its list of the best albums of the period 1967-1987. Costello and The Attractions toured and recorded together for the better part of a decade, though differences between them caused a split by 1986. Much of Costello's work since has been as a solo artist, though reunions with members of The Attractions have been credited to the group over the years. (Read more at Wikipedia.)

When Peel joined Radio 1 in 1967, Elvis Costello's father Ross McManus [1] was a regular on the Friday lunchtime Joe Loss Show, a Light Programme show which continued into the early years of the new pop station. McManus's job was to sing cover versions of current hits, although it's not known whether he sang on the dance-band versions of "Purple Haze" and "See Emily Play" which the DJ recalled with such distaste. However Ross McManus did inspire his son's choice of stage name, as one of the many aliases under which he recorded was Day Costello.

Having assumed his new name, Elvis Costello soon became far more famous than his father, with Peel's help. The DJ regularly played tracks from Costello’s first four albums – including the whole of ‘This Year’s Model’ over two nights in March 1978 – coinciding with the musician’s four sessions for the show. The first of these was notable for featuring material from ‘My Aim Is True’ with backing by the Attractions, who had not been on Costello’s debut album.

In 1979, Costello produced the first LP by the Specials, played extensively by Peel, and three years later co-wrote and produced Robert Wyatt’s ‘Shipbuilding’, which was voted #2 in the 1982 Festive Fifty; the following year, the DJ voiced his pleasure when Costello’s own version placed #48 in the show’s annual listeners' chart. The same 1983 Festive Fifty also contained ‘Pills and Soap,’ played by Peel on its initial single release by Costello under the name The Imposter.

Following Peel's death, Costello paid tribute to the DJ and showed that he had been a Peel listener: *Peel was the contradiction of every bad thing you could say about radio. He had an open mind about music, whether he was bringing the listener the Incredible String Band or the Fall, Mike Hart or Echo & The Bunnymen. and countless bands that appeared only to be heard on his great shows."[2] He called the DJ "a great man, a fabulous killjoy - he was as rare as the music that he loved." [3]

(The following list was compiled only from the database of this site, Lorcan's Tracklistings Archive, and Ken Garner’s Peel Sessions (pg217-9). Please add more information if known.)

Retrieved from "https://peel.fandom.com/wiki/Elvis_Costello?oldid=236515"
Community content is available under CC-BY-SA unless otherwise noted.