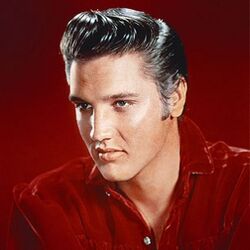 "I remember reading in the papers about Elvis Presley. And the language at the time, I can’t really recapture, but it was presented as, you know, a man of such extraordinary wildness and lack of control and so forth – that obviously excited me enormously....The HMV advertisement in the music press a week or so later said...it was like a fusion of Johnnie Ray and Billy Daniels. But of course he was much, much more than that. You became aware that this was something utterly different to anything you’d ever heard before." (Peeling Back The Years Part 1).

"I remember getting the (début) LP when it first came out. The effect on me was quite remarkable. I can't describe it to you really because I couldn't describe it to myself. But it was remarkable nevertheless. Quite transformed my life in a way." (22 January 1985)

Elvis Aaron Presley (1935-1977) was arguably the most important stylistic and musical icon of the 20th Century. He broke the boundaries of prejudice that existed between black and white music at the time by incorporating elements of blues, country and R&B into his early recordings (thereby creating rockabilly), and added a measure of sex appeal and showmanship into his act that continues to influence popular music to this day. His recordings were initially issued on the Sun label, which also had Jerry Lee Lewis and Carl Perkins on their roster, but when Sun owner Sam Phillips sold Elvis' contract to RCA for $35,000 and they released Heartbreak Hotel, it heralded the onset of rock'n'roll's highest profile act. Before Presley, teenagers had no voice: but he articulated their wants and desires and represented the challenge to authority that was lacking from more sanitised and older acts such as Bill Haley. It was of no account that some of his most famous early songs were covers of other artists' work (Carl Perkins' Blue Suede Shoes, Smiley Lewis' One Night and Big Mama Thornton's Hound Dog, to name a few): he invested them with a fresh and irresistible panache that made them his own. He made several films which tied profitable soundtrack LPs to their release, with Jailhouse Rock containing a stunning example of choreography to underpin its musical brio.

Presley spent much of his career under the iron control of Colonel Tom Parker, who ensured that Elvis presented the right mixture of rebellion and Southern courtesy. Elvis addressed interviewers as 'sir,' and projected an all-American God-fearing persona to the press, but unleashed a physical aura on stage that led to TV programmes refusing to show any of his movements below the waist. Censorship forced the change of the lyrics of One Night from 'one night of sin' to 'one night with you' (although a recording exists of the original version). This only helped to increase his desirability in the eyes of the record-buying public, and even the release of an acoustic ballad, Love Me Tender, did nothing to stem the tidal wave of adulation. Parker shrewdly ensured that when his protege entered the army in 1958, he had a stack of material which was steadily issued over the next two years in order to keep him in the public eye. However, it was a different Elvis that came back to civilian life. Gone were the sideburns and hip-swivelling, and his music concentrated on ballads and medium-paced material (Marie's The Name Of His Latest Flame, for example). The older fans clamoured for rock material, but all Presley offered was a diet of increasingly appalling Hollywood teen movies.

Ironically, this only served to increase his popularity: It's Now Or Never (1960), based on an old Italian ballad, became his biggest-selling single ever. His 1968 comeback TV show re-established his credibilty, after the bad films and pop ballads which had made him unfashionable with the post-Beatles audience, and fuelled a rock'n'roll revival at the end of the 1960s. It remains one of the most watched TV specials in history. Aloha From Hawaii (1973) was the first TV special globally transmitted via satellite, being seen by over a billion viewers. He put on a considerable amount of weight, became addicted to junk food and in the 1970s was content to play the cabaret circuit, releasing one single after another that contained little of his ground-breaking musical template (witness the nauseating nationalism of American Trilogy). He died on August 16, 1977 at his palatial Memphis home Gracelands and since then has sold more records than when he was alive (Way Down making the top of the charts in that year). Eilert Pilarm constructed an entire act from marketing himself as the 'Swedish Elvis Presley' and recording old Elvis songs in a tuneless and rambling style.

John later went into more detail concerning his first hearing of Elvis and Heartbreak Hotel in particular, apparently on the anodyne and normally sentimental BBC programme Two-Way Family Favourites, an event he described as "the defining moment of my life" and one to which only his attendance at the Captain Beefheart gig at the Whiskey A Go-Go supporting Van Morrison and Them was comparable:

"It may not sound like much today, but 'Heartbreak Hotel' had the effect on me of a naked extraterrestrial walking through the door and announcing that he/she was going to live with me for the rest of my life. As Elvis walked in, Frankie Laine and Johnny Ray tiptoed out and nothing was the same again. There was something frightening, something lewd, something seriously out of control about 'Heartbreak Hotel' and alarmed though I was by Elvis, I knew I wanted more. And I got it. I could still sing you every note of every song on that classic first eponymous LP and maybe one day I will." (Margrave Of The Marshes, Corgi edition, p. 70.)

Although he never made good on the latter threat, Peel, it seems, never quite recovered from that first musical assault (Sheila claims he bought the record from Cranes in Liverpool the very next day, something he never did again) [1] and was to continue to pepper his shows with Elvis tracks until the end of his life. He even went to the extent of making an unsuccessful auction bid of £3,000 for a Sun 45 signed by the band and 'Elvis Presley (singer).' He was, however, rather scathing about Presley's downward personal spiral in the seventies and was convinced that a few weeks' stay at Peel Acres would have revivified him [2]. Given the obvious level of respect in which he held him for his earlier career alone, the fact that he played no tribute whatsoever on the night of his death on 16 August 1977 (when JP was actually on air) and merely gave a formal announcement of what the news team had told him seems odd, but as Sheila explained:

There seemed little point in sending runners to the library for Presley records with which to saturate the airwaves, although several listeners later called the duty officer to ask why John had not done this. One or two other radio stations gave the rest of the night to Elvis, but, in all honesty, Elvis and rock hadn't had much in common for quite a few years, and John maintained that this sort of overreaction always smacked to him of necrophilia. (Margrave Of The Marshes, Corgi, p. 370.)

Nevertheless, he acknowledged the part that Elvis had played in both his life and the lives of countless others:

"Death, for those who live on, is the ending of a chapter rather than the end of the book, and although the dead may have no more part to play as characters, their influence may continue right through the story. Presley's certainly will, for he was the first person we met on Page 1, and although his records later became irrelevant to all but the diehard Presley devotees and his private life seems to have plumbed new depths of nightmarishness, nothing can ever take that away from him." (Margrave Of The Marshes, Corgi edition, p. 371.)

(The list below was compiled only from the Cover Versions page of this site and includes later versions of songs earlier covered by Elvis. Please add more information if known.)

Retrieved from "https://peel.fandom.com/wiki/Elvis_Presley?oldid=236572"
Community content is available under CC-BY-SA unless otherwise noted.