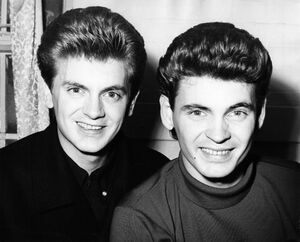 
The Everly Brothers were an American close harmony duo from Kentucky. They influenced early rock 'n' roll by infusing it with country influences. Isaac Donald 'Don' Everly (1937- ) and Phillip 'Phil' Everly (1939-2014) had a string of hits on both sides of the Atlantic: in the UK alone, they racked up 33 top 40 chart entries between 1957-1968, including four number ones. Their material ranged from straight ahead rockers (Wake Up Little Susie) to tear-drenched ballads (Ebony Eyes) and even droll pieces of humour (Bird Dog). They influenced the Beatles (who once referred to themslves as 'the English Everly Brothers'), Beach Boys and Simon & Garfunkel (the latter duo covered the teen heartbreak anthem Bye Bye Love in their stage act). One of Peel's heroes, Roy Orbison, wrote Claudette which they backed with All I Have To Do Is Dream and made it the biggest-selling UK single of 1958.

The brothers were close friends with Buddy Holly (Holly wrote Wishing for the duo and Phil was one of the pallbearers at Holly's funeral): however, whereas Holly and the Crickets purveyed a kind of Tex-Mex rock, the Everlys used deft steel-string guitar solos which gave a surprisingly hard edge to some of their material. Like Elvis Presley, the brothers entered the army, enlisting in the Marine Reserves for six months rather than being drafted for two years: unlike Elvis, however, who was more popular when he returned to civilian life than before, their spell out of the spotlight did them no good (that and the fact that they were both addicted to speed). Although their popularity waned in the USA in the wake of the British invasion, they continued to be popular in the UK and elsewhere, but by the end of the decade even a well-received excursion into country rock could not return them to the heights of their earlier success - although like other artists of their era they benefited from the brief "rock'n' roll revival" of 1969-70. An acrimonious onstage split in 1973 resulted in them having no contact for almost a decade until they were reunited by guitarist Albert Lee.

Peel saw the Everlys at the Royal Albert Hall and was in the States just as they were at the peak of their powers and during their wane. Soon after he joined Radio London on his return to Britain, the duo had a chart hit with "Bowling Green", a song in the 1967 "sunshine pop" style, which made the Radio London Fab 40 in May 1967 and was much played on the station's daytime shows (although not on the Perfumed Garden). In the following year, their "Gone, Gone, Gone" was recorded as a BBC session track by Fairport Convention. Old Gold released a box set of their original 7 inch singles in 1980, which caused JP to resurrect rarely-played B-sides such as their covers of Gene Vincent and Little Richard, and he hoped that similar projects featuring other rock 'n' roll performers such as Chuck Berry were in the pipeline. His taste for for the Everlys' rockier style resulted in a considerable roster of plays (including one of their 1965 chart hit "The Price Of Love") and even a placing in the Peelenium. John also evinced a liking for the sparser sound of the LP Songs Our Daddy Taught Us, which AllMusic describes as being "quite a surprise from a top rock 'n' roll act, and considerably ahead of its time." On 08 May 2003 he described it as one of the saddest in his collection.

Phil Everly died of chronic obstructive pulmonary disease on January 4, 2014, two weeks shy of his 75th birthday. Track listing details reveal a fair number of plays by Peel for his solo LP Star Spangled Springer: this was due to its being produced by Duane Eddy (see 23 March 1999).

Retrieved from "https://peel.fandom.com/wiki/Everly_Brothers?oldid=250631"
Community content is available under CC-BY-SA unless otherwise noted.