"And I often think, when I'm putting programmes together at home, that it would be nice to play more of the records that I played when these programmes first started, quite a long time ago. I was just discussing it with the production team, and they weren't entirely certain for example about Fairport Convention, who did ten or eleven sessions for this programme back in the late 60s and 70s and so on. A lot of people listening tonight will not have heard them. One of the very best live gigs that I went to in all of my life was a Fairport Convention gig in Swindon, an unforgettably great night." (28 May 2002) 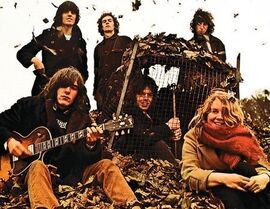 Fairport Convention were formed in North London in 1966 by Ashley Hutchings, who had witnessed Bob Dylan's performance at the Manchester Free Trade Hall on May 17 1966. Dylan had provoked anger and catcalling for mixing his folk set with electric instruments, but Hutchings was energised by this and with Simon Nicol and the prodigiously talented guitar player / songwriter Richard Thompson put together the band. It was initially inspired by American folk-rock singers and groups (notably the Byrds and the Lovin' Spoonful) and saw itself as a British answer to Jefferson Airplane and, later, the Band. But Fairport went beyond their early influences, promulgating a radical folk rock vision which would change the course of the entire genre. This was enhanced even further when they were joined by Sandy Denny, previously a member of another London band, the Strawbs, who brought with her some knowledge of the folk music they wanted to play and a crystalline voice with impeccable phrasing. Another key addition to the line-up was folk fiddle virtuoso Dave Swarbrick. Two of their albums, Unhalfbricking and the "electric folk" LP Liege & Lief (both 1969), have passed into the classic pantheon of recorded music, and their popularity was such that they even broke into the UK pop charts with an acknowledgement to Hutchings' inspiration: 'Si Tu Dois Partir' (a French version of Dylan's 'If You Gotta Go, Go Now') made number 21 in mid-1969.

Peel saw them at McIlroy's Ballroom in Swindon in 1969, stating that "they played better, I think, than I've ever heard any English group play anywhere at any time" (16 February 1969) and would still remember this performance many years later. He cited them as one of his favourite bands, noting that coincidentally three of these started with the letters 'Fa' (04 November 1999), although he graciously acceded to a listener's request not to play anything by them in that show, as the party concerned had been on holiday at a hotel where they played nothing but (13 July 1999).

After their commercial and critical highpoint of 1968-69, Fairport experienced frequent personnel changes and a fair degree of bad luck. This began with a motorway crash in 1969, which killed drummer Martin Lamble and Richard Thompson's then girlfriend Jeannie Frankiln (a few months later, Peel hosted a benefit concert for the band at the Roundhouse[1]). By 1972 Hutchings, Sandy Denny and Thompson had all left. But Fairport remained a staple of the Top Gear years, and were the first band to record eleven sessions for JP (despite his later claim that the Fall deserved this accolade: see Peel 038 (BFBS)). Their most productive year with the BBC was 1968, when no fewer than five were recorded (the only band ever to do so). Ashley Hutchings describes the enjoyable process of recording BBC sessions in this period in his notes to the Island Records compilation of their session work, Heyday, with the band's willingness to experiment with fresh material being encouraged by producers and recording engineers. Their version of Leonard Cohen's 'Suzanne,' often performed live, was the only studio recording of it that they ever made.

Records and sessions by former members of Fairport Convention were also featured in Peel's shows - Ian Matthews with Matthews Southern Comfort and Plainsong, Sandy Denny with Fotheringay and as a solo artist, Ashley Hutchings with the early line-ups of Steeleye Span and the Albion Country Band as well as his Morris On projects, Richard Thompson both solo and with his wife Linda, Judy Dyble with Trader Horne (the band was named after Peel's nanny[2]). The evolution of the group and its many offshoots can be seen in two of Pete Frame's Rock Family Trees. Fairport were profiled in a 1976 retrospective on Kat's Karavan, along with other seminal sixties artists, and in programme 4 of As I Roved Out: A Century Of Folk Music. Their commitment to the continued promulgation of the folk ethic was cemented when they instituted the Cropredy Festival in 1979. They perform and record to this day.

Retrieved from "https://peel.fandom.com/wiki/Fairport_Convention?oldid=239734"
Community content is available under CC-BY-SA unless otherwise noted.