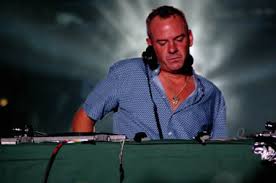 
Fatboy Slim is the alter ego of the musician Norman Quentin Cook (born Quentin Leo Cook in 1963 and changed his name by deed poll in 2002). He was bassist with the Housemartins, who recorded several sessions and were frequently played on Kat's Karavan, and sang a capella with them under the name Fish City Five. Cook recorded solo under the name of Norman Cook, whilst with the Housemartins when he made a hip hop cut-up megamix promo, which never got officially released, due to the amount of samples used. When the Housemartins split amicably in 1988, Cook continued his Norman Cook project and later on formed Beats International, which had a UK number one hit single in 1990 with Dub Be Good To Me: he also participated in a variety of other acts with varying degrees of success.

However, his career was truly revivified in 1996 when, under the name Fatboy Slim, he made the critically acclaimed LP Better Living Through Chemistry and followed this up with a series of commercially and critically successful albums and singles, achieving another UK number one in 1998 with Praise You. His single The Rockafeller Skank ran to nearly seven minutes on the version from the album You've Come A Long Way, Baby: edited down to under four (and including a remarkable vocal sample slowly speeded up to resemble an air raid siren), it peaked at number six in the UK charts in the summer of 1998. (One of the other samples was from Duane Eddy's Peter Gunn: Cook had to sign away his entire royalties from Rockafeller Skank in order to get all the samples legally cleared.)

Peel played some of Norman Cook's work after the artist left the Housemartins (although not with the other members). In 1998 Cook via his Fatboy Slim project, released the successful You've Come A Long Way Baby album which achieved success in the UK charts. The album didn't attract Peel, who didn't play any of the tracks from it, except when listeners of his show took The Rockafeller Skank track to number 28 in the 1998 Festive Fifty.

Cook's skill as a remixer propelled Brimful Of Asha by JP favourites Cornershop to number one in the UK charts the year after it had hit top spot in the 1997 Festive Fifty. In 2002, Peel was a host at Glastonbury when Cook appeared. In a Forbes interview published in 2012, Cook said that "John Peel gave me my musical education". [1]

Retrieved from "https://peel.fandom.com/wiki/Fatboy_Slim?oldid=241853"
Community content is available under CC-BY-SA unless otherwise noted.