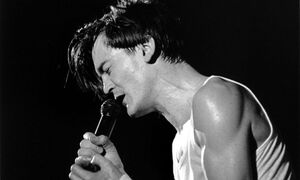 Seán Feargal Sharkey OBE (born 13 August 1958) is a singer from Northern Ireland who first found fame as the lead vocalist of punk band The Undertones. Since moving away from performing in the early 1990s, he has performed various roles supporting the UK's commercial music industry, winning several awards and honours for his work in that area. Sharkey, who was born in Derry, Northern Ireland, was a co-founder of The Undertones at their inception in 1976. In the 1970s they played in many locations throughout Northern Ireland, including the Flamingo Ballroom in Ballymena and Chester's in Portrush. The Undertones had several UK hits with songs such as "Teenage Kicks", "Here Comes The Summer", "My Perfect Cousin", "Wednesday Week" and "It's Going To Happen". The band split in 1983 citing musical differences, with Sharkey pursuing a solo career and other members of the band forming That Petrol Emotion the following year. Before his solo career took off, he was also the singer of the one-shot group The Assembly with ex-Yazoo and Depeche Mode member Vince Clarke (pre-Erasure). In 1983 their single "Never Never" was a UK No. 4 hit. (read more on wikipedia)

Peel was a big fan of the Undertones, including their Teenage Kicks single, which was his favourite song of all time. Singer Feargal Sharkey eventually left to join a one-off group with Vince Clarke (formerly of Depeche Mode) and Eric Radcliffe called The Assembly, whose track Never Never reached number 23 on the 1983 Festive Fifty. Peel also played both sides of Sharkey's debut single, on 25 September 1984. While Feargal's solo music career was very commercialised pop, a complete contrast to his punk style as a member of the Undertones, Peel continued supporting him and even praised his voice in the first programme of the Peeling Back The Years series in 1987:

"It has by and large been the extreme voices that I’ve liked, you know, all the way from Gene Vincent and Lonnie Donegan up to Feargal Sharkey and Mark Smith and so on, with people like Marc Bolan and Captain Beefheart in between."[1]

By his 17 January 1993 (BFBS) show, however, the DJ was questioning the quality of Sharkey's solo efforts, which were seldom played in later years.

After Peel's death, Feargal paid tribute at his funeral and took part in the 2005 Channel 4 documentary John Peel's Record Box, praising the DJ for his support of the Undertones.

Retrieved from "https://peel.fandom.com/wiki/Feargal_Sharkey?oldid=216934"
Community content is available under CC-BY-SA unless otherwise noted.