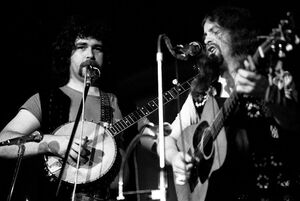 Finbar and Eddie Furey were an Irish folk duo (FInbar on uillean pipes, Eddie on guitar and vocals) who began performing on the folk club circuit in the 1960s. They recorded LPs for the Transatlantic and Dawn labels before becoming internationally popular in the 1970s as part of a larger family group, The Fureys and Davey Arthur.

The group formed in 1978 and consisted initially of four brothers. Prior to the band two of the brothers toured as a duo known simply by their names as Eddie and Finbar Furey. Their brother Paul Furey had, together with Davey Arthur and Brendan Leeson, a band called The Buskers. Both were part of a successful tour through Germany called the "Irish Folk Festival", first in 1974, where they performed as The Furey Brothers and later as The Furey Family. Here they were joined by their father Ted, a famous fiddler, who was 73 at that time. Ted Furey had recorded a solo fiddle album Toss the Feathers released by the Outlet label in 1973.

In 1981, The Fureys released their most successful single "When You Were Sweet Sixteen", becoming a worldwide hit, reaching #14 on the UK Singles Chart, #1 on the Irish Singles Chart and #9 on the Australian Singles Chart."The Green Fields of France" also gave them an Irish #1, remaining in the single charts for twenty eight weeks. They also had two Top 40 British albums called Golden Days and At the End of the Day. Other notable songs include "Gallipoli", "The Red Rose Cafe", and "Steal Away". As of January 2008, the band is still recording and touring. In 2008 the band celebrated their 30th anniversary. Finbar left the band to begin his own solo career and Eddie, George and Paul reformed with Davey Arthur to become a successful band. Paul Furey died suddenly in June 2002. All four of the brothers are married with children.

Finbar and Eddie Furey's single "Her Father Didn't Like Me Anyway", a version of a Gerry Rafferty song originally recorded by The Humblebums, was enthusiastically received by Peel, becoming one of his favourite records of 1972 - according to one source it was his favourite record of that year, but despite repeated plays on his programmes, it failed to trouble the UK charts.

In the early 1980s The Fureys achieved a number one hit in the Irish charts with their version of "The Green Fields of France", a lament for the fallen soldiers of World War 1 written by the Scots-Australian folk singer Eric Bogle. The song had previously been heard on John Peel's shows under the title "No Man's Land", both in the version recorded by June Tabor on her 1977 album "Ashes And Diamonds" and as part of her Peel session of 19.7.77.

The list below is almost certainly incomplete and was compiled only from the database of this site. Please add more information if known.

Retrieved from "https://peel.fandom.com/wiki/Finbar_%26_Eddie_Furey?oldid=229273"
Community content is available under CC-BY-SA unless otherwise noted.