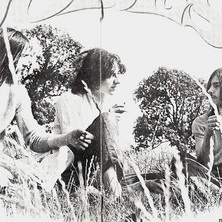 Forest were an English psychedelic-folk / acid-folk trio who formed in Grimsby, Lincolnshire, in 1966. Made up of brothers Martin Welham, Adrian Welham and school friend Dez Allenby, they started out performing unaccompanied traditional folk music in a similar vein to contemporaries The Watersons and The Young Tradition. The band were pioneers of the nascent 1960s underground acoustic-psychedelic/acid-folk scene writing unconventionally crafted songs evoking Britain's ancient groves using a variety of acoustic instruments.

Beginning life under the name The Foresters of Walesby, the group began singing unaccompanied vocal harmony folk songs in Lincolnshire folk clubs. After relocating to Birmingham, West Midlands, in 1968, they shortened their name to Forest and soon progressed to writing within the burgeoning psychedelic/acid folk movement in the wake of the Incredible String Band's emergence in the mid-1960s. They were championed by DJ John Peel and performed several sessions for BBC Radio 1. In 1969, they were signed by Blackhill Enterprises and were amongst the first wave of signings for EMI's new progressive Harvest Records label.(Read more at Wikipedia)

During their short career Forest failed to trouble the charts, or to impress the music paper critics. However they did manage to gain the respect and affection of Peel and his then girlfriend Sheila Gilhooly (later Ravenscroft), living with them for a time at the London Peel Acres in Park Square Mews, and in later years he remarked that, of the bands who took advantage of his hospitality during his "hippy open house" period, they were the only group he liked as people.

Peel devotes three paragraphs of his Disc & Music Echo column of August 2, 1969[1] to "the Forest", as he then called them. He calls them "three layabouts from Walesby in Lincolnshire, who decided to seek fortune and fame in the Big City but got the wrong lift on the M1 and ended up in Birmingham", before going on to praise their (as yet unreleased) first LP for which he wrote the sleevenotes, In the notes he says the band's music is "full of sunshine, leaves and running water", mentions that he first met them in Birmingham in the autumn of 1968, and that he was introduced to them by "a young man calling himself Mark Williams - obviously an assumed name". (Williams later moved to London and became editor of the music supplement of International Times; he also wrote one of the few press articles on Forest in the 11 April 1969 issue of the paper.). Peel introduced Forest at one of his regular dates at Birmingham's Mothers club, on 20 March 1970.

In Margrave Of The Marshes (pp.190-91) Sheila Ravenscroft wrote:

One of the bands that spent a lot of time at John's house was Forest - or, as John writes in his diary, "the luckless Forest whose second LP is beautiful and almost certain not to sell at all". They were a charming group of lads whom you could happily have taken home to meet your mother, so long as she had lost all sense of smell. It would be kindest to say only that their musical prowess far outstripped their grasp of personal hygiene; at times the situation got so severe that John actually forced them to have a bath.

They also wish to acknowledge the support and encouragement they received from John Peel, God’s presenter and leading exponent of ‘cutting-edge’, obscure and newly emerging music for nearly four decades. "John even put us up in his home when things were tough. He, too, was a good friend to Forest."[2]

Retrieved from "https://peel.fandom.com/wiki/Forest?oldid=242842"
Community content is available under CC-BY-SA unless otherwise noted.