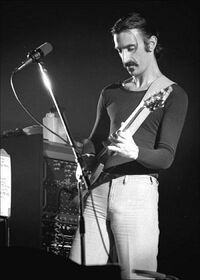 Frank Vincent Zappa (December 21, 1940 – December 4, 1993) was an American composer, singer-songwriter, electric guitarist, recording engineer, record producer and film director. In a career spanning more than 30 years, Zappa wrote rock, jazz, orchestral and musique concrète works. He also directed feature-length films and music videos, and designed album covers. Zappa produced almost all of the more than 60 albums he released with the band The Mothers of Invention and as a solo artist ... (read more at Wikipedia)

Peel would certainly have been aware of The Mothers Of Invention as major figures on the LA underground music scene when he was working at KMEN in California, particularly after the release of their acclaimed 1966 debut album, Freak Out!, as suggested by Sheila Ravenscroft in Margrave Of The Marshes (hardback, pg, 220). After Peel's return to England, he obtained a copy of their second album, Absolutely Free, and the band, very much dominated by the personality and compositions of Frank Zappa, became mainstays of the Perfumed Garden. Peel often played sequences of tracks from the LP and a full side was played on the last night of the Radio London show, on 14 August 1967. The Mothers were also mentioned in the lyrics of Geoffrey Prowse's fan tribute to the programme, 'The Perfumed Garden Blues, Or John Peel's Lament':

He played the Mothers of Invention and the Velvet Underground ... [1]

They were also one of the first of the American groups featured on the programme to visit the UK, playing a concert at London's Royal Albert Hall in September 1967. In 1967-68 Zappa was seen as a social satirist who lampooned America's uptight older generation, and the comedic aspects of the first three Mothers of Invention LPs even led to comparisons with the Bonzo Dog Band. Because of this, Zappa and the band became firm favourites of the "freaks" of the late 1960s and early '70s, despite mocking naive hippies as well as straights on the Mothers' 1968 LP, which Peel featured on Top Gear. Another Zappa project of that year, the doo-wop tribute/parody LP Cruising With Ruben And The Jets. also met with Peel's approval and received Top Gear airplay. He wasn't quite so sure about Zappa's first solo album, writing in his International Times column of 14 June 1968 that "Frank Zappa's 'Lumpy Gravy' is strange. I honestly don't know if it's good or not..." [2]

The 1969 album Hot Rats, a largely instrumental set issued under Zappa's own name, sold well in the UK and was played on Peel's shows, particularly the track "Willie The Pimp", which included a vocal by Captain Beefheart. Zappa's popularity with the rock audience continued after the break-up of the Mothers of Invention in the mid-1970s, and Peel still played Zappa tracks on his shows, even if these were less provocative than before. Zappa's businesslike and highly disciplined approach to his career seemed at variance with his anarchic image and the sometimes eccentric artists (Beefheart, Wild Man Fischer, the GTOs) he had promoted on his Bizarre label.

Over the following decades, however, Peel appeared less than enthusiastic about the Mothers' driving force, playing Zappa's records less often than might have been expected, especially in view of the musician's links with Beefheart, one of Peel's all-time favourites. In the mid-eighties, when Peel discussed the subject of Zappa with producer John Walters, the DJ suggested that he had simply stopped enjoying the music of the former Mothers leader:

JW: With the first album people thought, “There is something happening here. What is happening?” What is? I mean, Frank Zappa you are now likely to see with an orchestra at the Barbican. Well, how do you feel about Zappa? There’s a good man to look at.
JP: Well, his early stuff I used to enjoy quite a lot. I mean, until he got into his kind of lavatorial phase, which I found rather tedious, and that seemed to take up like a decade of his life. I mean, everything he did was fairly lavatorial, which is fine if you are like 12 years old or something – our William would probably find it all vastly entertaining – but I just found it rather tedious. But his early things I liked a lot. And of course I admired him as much as anything for his sponsorship not only of people like Wild Man Fischer but also Captain Beefheart, which is kind of crucial. Well, in the early part of his own life.
JW: And yet his own work rather lost that rootsy almost instinctive feel about Beefheart and Wild Man Fischer, were Zappa came to be more as if were like “a contemporary composer” - “it’s a funny life, this music...”
JP: People have this yearning to be the clown playing Hamlet, you know. They all want to be taken terribly seriously and to be perceived as “artistes”.[3]

Peel did continue to play very occasional tracks from the prolific Zappa, but these were the exception rather than the rule. In response to a message from a listener, he suggested on his 16 March 2004 show that personal issues may also have been involved:

I used to rather admire Frank Zappa, I have to admit, when he first started with the Mothers Of Invention, but then I met him. And I have to say he was very odious, or he was to me anyway, because obviously DJs quite rightly are held in scant respect and he made this abundantly clear. So I thought, 'Well, I don't think I shall bother to play any more of your records.' So I'm not going to.

Peel appears to have met Zappa on at least three occasions. The first of these apparently took place at the Speakeasy club in London on 1967-08-17.[4] In his Perfumed Garden column for International Times at the end of that month, Peel wrote:

I exchanged persecution manias with Frank Zappa at the Speak-easy (trendy!) during the showing of an extraordinary film he'd made and to the accompaniment of the Mothers' latest recorded idyll called "We're only in it for the Money" which is, as usual, indescribable. [5]

This does not seem to be the night Sheila Ravenscroft refers to in Margrave Of The Marshes (hardback, pg273) - drawing a parallel with an earlier snubbing of the sensitive Peel by members of The Byrds - which appears to have taken place the following month, when Zappa returned to London with the Mothers for the Albert Hall concert (on 1967-09-23):

The Mothers Of Invention failed to let him in on their peace-pipe pow-wow. ('They were all smoking and didn't want to offer young Peel any," he writes on 21 September 1967. "Enraged. Just walked in and one of them said, 'What's he doing here?'.")

In 1970, Peel again crossed paths with Zappa, for the filming of a TV interview ahead of one of the summer's big festivals. [6] Again, the meeting doesn't appear to have gone well. Later, the DJ wondered:

Did I really sit on a four-poster bed with Frank Zappa trying to interview him before the Mothers Of Invention played at Shepton Mallet? And did he really only want to talk about money? [7]

Whatever Peel's personal or musical differences with Zappa, both men had enduring ties with Captain Beefheart. After Zappa's death - marked by Peel with four tribute tracks on the 10 December 1993 show - his reminiscences about his former schoolfriend and musical collaborator/rival were featured in The Artist Formerly Known As Captain Beefheart, a TV documentary narrated by Peel.

Retrieved from "https://peel.fandom.com/wiki/Frank_Zappa?oldid=242656"
Community content is available under CC-BY-SA unless otherwise noted.