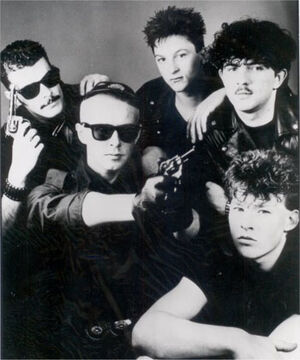 Frankie Goes to Hollywood (FGTH) were a British band founded in 1980 and split in 1987, before reforming between 2004 and 2007. The group was fronted by Holly Johnson (vocals and former bass player in Big In Japan), with Paul Rutherford (vocals, keyboards), Peter Gill (drums, percussion), Mark O'Toole (bass guitar), and Brian Nash (guitar).  The group's debut single "Relax" was banned by the BBC in 1984 while at number six in the charts and subsequently topped the UK singles chart for five consecutive weeks, going on to enjoy prolonged chart success throughout that year and ultimately becoming the seventh best-selling UK single of all time. It also won the 1985 Brit Award for Best British Single. After the follow-up success of "Two Tribes" and "The Power of Love," FGTH became only the second act in the history of the UK charts to reach number one with their first three singles; the first being fellow Liverpudlians Gerry & the Pacemakers. In 1985, Frankie Goes to Hollywood won the Brit Award for Best British Newcomer, and the band also received Grammy Award and MTV Video Music Award nominations for Best New Artist. (Read more at Wikipedia.)

Touring around Liverpool, the group began to garner a cult following. They even joined up with another group – The Leatherpets. Through their local popularity, Frankie Goes To Hollywood was able to make their own promotional videos and record demos, despite having been turned down by majors like Arista and Phonogram. In 1982, Peel invited them to do a session, which included an early version of Two Tribes, and also took the group with him on his roadshow on 17 December 1982 at North Cheshire College in Warrington.  Soon after, the group was asked to record a video for Relax and this was shown by Channel 4 on The Tube in 1983. The growing popularity of the group convinced Grammy Award-winning producer Trevor Horn to sign them to his newly formed ZZT Records.

When the BBC banned "Relax" in 1984 after Mike Read found the lyrics supposedly obscene, Peel scoffed and played it on his show, along with David Jensen, who also disagreed with the ban. Although this incident went down in Radio One folklore, Peel himself cast doubt on the simplicity of the issue. [1]

"Well I was always told the only reason Mike Read made his little speech about it was because he had a lot of time on his hands leading up to a news bulletin, which was like half past something and he had 20 seconds to go, and he didn’t have enough time to do what we usually did and get his guitar out and sing 'Rubber Ball'. So he thought 'I’ve got to say something' and he launched into his damning. I don’t know if this is true or not and I don’t really care."

Furthermore, Peel would later describe the band's Top of the Pops performance of this song as his favourite ever from the show. The song was banned on the show on 02 February 1984 (TOTP), which Peel and Jensen presented, despite the song being at number one.

Retrieved from "https://peel.fandom.com/wiki/Frankie_Goes_To_Hollywood?oldid=229487"
Community content is available under CC-BY-SA unless otherwise noted.