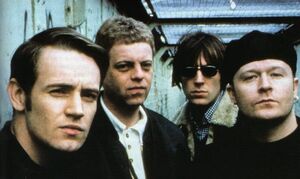 Gene were an English indie quartet that rose to prominence in the mid-1990s. Formed in 1993, they were popularly labelled as a Britpop band and often drew comparisons to The Smiths because of their Morrissey-esque lead singer, Martin Rossiter. Gene's music was influenced by The Jam, The Small Faces, The Style Council and The Clash. Gene's origins lie in a previous band which was first called The Go Hole, named after a fictional "Beat" club in John Clellon Holmes' novel Go, and later renamed Sp!n. The band was formed by Lee Clark (vocals/guitar) and Daz Walton (bass). Soon afterwards, James joined on drums. A few years later, Clark, Mason and James recruited Mason's brother Steve Mason to play lead/rhythm guitar and thereby free Clark to focus on vocal style. Despite further successful live shows in subsequent years including a set at the Morrissey curated Royal Festival Hall Meltdown Festival in June 2004, Gene opted for an amicable split later that year. It is said that the band felt they were somewhat stuck in a rut, and had achieved as much as they felt they could. They realised that, although they had a loyal fan base and plenty of critical acclaim, they were never going to become world-conquering greats. Gene's last live performance was played on 16 December 2004 at the London Astoria, and there are not expected to be any further recordings or appearances. The band members have all continued to work in music. Roy Wilkinson went on to manage the band British Sea Power, while Snake Newton went on to mix an assortment of acts including Duran Duran, Sugababes, Pet Shop Boys and Snow Patrol. In the third week of January 2008, all four members of Gene briefly took to the stage again for their ex-manager Jerry Smith's 50th birthday party. They performed five songs at the 100 Club in London: "Be My Light, Be My Guide", "For The Dead", "Where Are They Now?", "London, Can You Wait?" and "Olympian". Through out their time, the band achieved ten Top 40 UK Singles and two Top 10 UK albums.

Peel initially played the band's material in 1994, but when they became popular, he lost interest because of the media hype around them. However after seeing them live, he had a change of mind and continued playing their material. On his show from 20 February 1999 (BFBS), Peel made the following comments:

"I have to say that earlier Gene records and kind of all the hype that surrounded them when they first started off rather put me off, and this was my loss, and I think probably yours as well, 'cos if you were a regular listener, I never played any of their tunes, but they've done a lot of live stuff for me for programmes here in Britain, and they've always been absolutely excellent, and their records get better all the time, I think."

Members of Gene were among the studio guests for Peel's Christmas show on 08 December 1999. In addition to performing a live number, Rossiter also played the piano for the studio choir's renditions of festive numbers.

The band did six sessions for Peel's show and the first four are available on the Gene - John Peel Sessions 95 - 99 (Polydor, 2006)