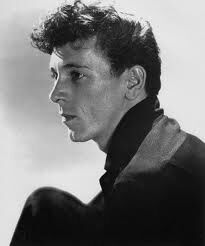 "Gene looked, as I dreamed of looking, completely out of control. He almost completely ignored the audience, staring wild-eyed into the wings as though demons lurked behind the Empire's plush curtains. From time to time, he would fling his damaged leg - held together. we were told, in defiance of medical reason, with pins - over the microphone, and that unearthly high, almost feminine voice that I sang along with in my bedroom echoed like something abandoned and fearful, in the Liverpool night. Gene was perfect, exactly as I had hoped he would be, and all I have to do to recapture that night is listen to 'Race With The Devil' or 'Who Slapped John' or any other of dozens of classic tracks. Perhaps the fact that Gene never really made it commercially in the way that he surely should, helped to endear him to me." (JP's remembrance of seeing Vincent and Eddie Cochran at the Liverpool Empire on 12 April 1960, as recounted in Margrave Of The Marshes, pp. 169-70, Corgi edition, 2006.)

Gene Vincent (1935-1971) was born Vincent Eugene Craddock and, aside from being an early rock'n'roll star, pioneered rockabilly with the song Be Bop A Lula. Although he never had a top 10 hit in the UK, he toured successfully there and achieved greater and more long-running chart success than in his native country. A motorcycle accident in 1955 left him with a shattered leg that he refused to have amputated. It was saved, but he was left with a metal sheath round his leg, a limp and pain for the rest of his life. 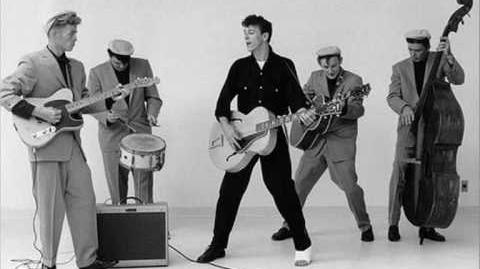 After having a massive hit in the US and a sizeable hit in the UK with Be Bop A Lula (which strangely was originally a B-side to Woman Love, a suggestive song banned by the BBC), Vincent and his band The Blue Caps had difficulty following it up with chart success of similar magnitude, and Vincent left America in 1959 after a dispute with the tax authorities there. Jack Good put him on his TV show Boy Meets Girl and transformed his image, dressing him in black leather, gloves and a medallion and making him hunch over the microphone. This is how Peel would have seen him on April 12, 1960 when he appeared at the Liverpool Empire on the same bill as Eddie Cochran, and although John was obviously already familiar with his work, this appearance inspired him with a lifelong devotion to the man and his music.

Four days later, Vincent was involved in another road accident, this time in a private taxi he was sharing with Eddie Cochran. Cochran died and Vincent was left with broken bones and further damage to his leg. He returned to the States to recuperate, but was back on tour in the UK in 1961, and moved there permanently in 1963. His backing band at the time were called the Outlaws and featured a young Ritchie Blackmore (Deep Purple, Rainbow). Problems with alcohol marred both the tour and any further attempts to regain his earlier musical stature throughout the 60s.

He recorded an LP, I'm Back And I'm Proud, for Peel's Dandelion label in 1969. Containing a superior backing band that included Jim Gordon on drums and Linda Ronstadt on backing vocals, this featured a mixture of original compositions and rock'n'roll standards (and yet another version of Be Bop A Lula). As JP put it, "although it wasn't a great record, it was still a Gene Vincent record." [1]

The final two years of Vincent's life included a return to the US, two further albums with the Kama Sutra label, and two sessions at the BBC for Top Gear and Johnnie Walker's show, during a 1971 UK tour. Vincent returned to the US to visit his father in California and died there from a ruptured stomach ulcer. John attempted to explain why he held him in such high regard:

"I suppose one of the reasons Gene Vincent was always me favourite of the early rockers was that unlike most of the others, Eddie Cochran, Jerry Lee Lewis, even Elvis Presley, he wasn't just a country and western artist who was making rock'n'roll records and wanted to get back to doing country and western music. He was always a rocker." (04 June 1979.)

JP narrated a documentary for Radio 2, Race With The Devil: The Gene Vincent Story in 1998. The Fall included a cover of 'Race With The Devil' in their set celebrating Peel's 50th birthday, broadcast on 30 August 1989. The White Stripes, similarly aware of his veneration of Vincent, included a version of 'Baby Blue' as an encore to their live session on 25 July 2001, and Laura Cantrell gifted JP with a complete set of Vincent records for Christmas on the 23 December 2003 show.

(JP: 'He was a great man, I loved Gene Vincent, my favourite of the rockers, really, despite the fact that that's not a rocking tune by any stretch of the imagination.')

(JP: 'I think the quintessential rock and roll record for me has always been – because it brings together my two favorite elements, which are those kind of untamed voices, people sounding like madmen really, or mad women, mainly madmen, and guitar playing. I’ve never understood why it is that nobody has actually duplicated the guitar sound that was on those early Gene Vincent records – that very high, clear, ringing guitar sound. So the very best record I think of the era and the genre was Gene Vincent & The Bluecaps, Race With The Devil.')

Retrieved from "https://peel.fandom.com/wiki/Gene_Vincent?oldid=283656"
Community content is available under CC-BY-SA unless otherwise noted.