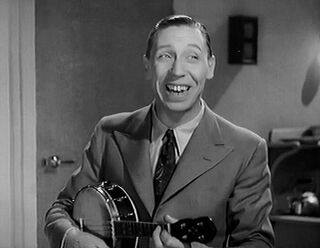 George Formby, OBE (born George Hoy Booth; 26 May 1904 – 6 March 1961), was an English actor, singer-songwriter and comedian who became known to a worldwide audience through his films of the 1930s and 1940s. On stage, screen and record he sang light, comical songs, usually playing the ukulele or banjolele, and became the UK's highest-paid entertainer.

Born in Wigan, Lancashire, he was the son of George Formby Sr, from whom he later took his stage name. After an early career as a stable boy and jockey, Formby took to the music hall stage after the early death of his father in 1921. His early performances were taken exclusively from his father's act, including the same songs, jokes and characters. In 1923 he made two career-changing decisions – he purchased a ukulele, and married Beryl Ingham, a fellow performer who became his manager and transformed his act. She insisted that he appear on stage formally dressed, and introduced the ukulele to his performance. He started his recording career in 1926 and, from 1934, he increasingly worked in film to develop into a major star by the late 1930s and 1940s, and became the UK's most popular entertainer during those decades. The media historian Brian McFarlane writes that on film, Formby portrayed gormless Lancastrian innocents who would win through against some form of villainy, gaining the affection of an attractive middle-class girl in the process.

During the Second World War Formby worked extensively for the Entertainments National Service Association (ENSA), and entertained civilians and troops, and by 1946 it was estimated that he had performed in front of three million service personnel. After the war his career declined, although he toured the Commonwealth, and continued to appear in variety and pantomime. His last television appearance was in December 1960, two weeks before the death of Beryl. He surprised people by announcing his engagement to a school teacher seven weeks after Beryl's funeral, but died in Preston three weeks later, at the age of 56; he was buried in Warrington, alongside his father.

Formby's biographer, Jeffrey Richards, considers that the actor "had been able to embody simultaneously Lancashire, the working classes, the people, and the nation". Formby was considered Britain's first properly home-grown screen comedian. He was an influence on future comedians—particularly Charlie Drake and Norman Wisdom—and, culturally, on entertainers such as the Beatles, who referred to him in their music. [1] Since his death Formby has been the subject of five biographies, two television specials and two works of public sculpture....(Read more)

Peel played several tracks by Formby, one of which made the Peelenium for 1935 (as did his father for 1920) and another as a Pig's Big 78: he cited the first as a particular favourite. John clearly had a reasonable knowledge of Formby's oeuvre, since he referred at least once to Bless 'Em All ([2]), and the 17 August 1978 play of Chinese Laundry Blues is used as a joke follow-up to yet another play of Hong Kong Garden: JP drily adds, "Street credibility rules."

Retrieved from "https://peel.fandom.com/wiki/George_Formby?oldid=212299"
Community content is available under CC-BY-SA unless otherwise noted.