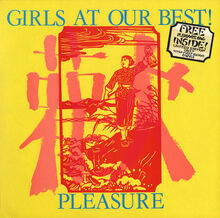 Girls At Our Best! were a British post-punk band, founded in Leeds, England in 1979 under the name The Butterflies. They had several UK Independent Singles Chart hits during their three-year existence.

The group initially consisted of vocalist Judy "Jo" Evans, guitarist James "Jez" Alan, bassist Gerard "Terry" Swift and drummer Chris Oldroyd. They took their new name from a line in their track "Warm Girls", released as the B-side to their self-financed 1980 debut single "Getting Nowhere Fast". The single, released in April 1980 on their own Record Records, reached No. 9 on the UK Indie Chart.

Retrieved from "https://peel.fandom.com/wiki/Girls_At_Our_Best!?oldid=242399"
Community content is available under CC-BY-SA unless otherwise noted.