Glastonbury Festival (originally Pilton Pop, Blues & Folk Festival; formerly Glastonbury Fair; Glastonbury CND Festival; current formal title Glastonbury Festival of Contemporary Performing Arts) is a five-day music festival that takes place near Pilton, Somerset, England. In addition to contemporary music, the festival hosts dance, comedy, theatre, circus, cabaret, and other arts. Leading pop and rock artists have headlined, alongside thousands of others appearing on smaller stages and performance areas. Films and albums recorded at Glastonbury have been released, and the festival receives extensive television and newspaper coverage. Glastonbury is the largest greenfield festival in the world, and is now attended by around 175,000 people, requiring extensive infrastructure in terms of security, transport, water, and electricity supply. The majority of staff are volunteers, helping the festival to raise millions of pounds for good causes.

Inspired by the ethos of the hippie, counterculture, and free festival movements, the festival retains vestiges of these traditions, such as the Green Fields area, which includes sections known as the Green Futures and Healing Fields. After the 1970s, the festival took place almost every year and grew in size, with the number of attendees sometimes being swollen by gate-crashers ... (read more at Wikipedia)

“I just like coming here. I like the atmosphere generally, I like some of the unsuitable and fattening foods that they serve. And incidentally, I quite like some of the music, but the music I have relegated almost to secondary importance to the event itself.”
(John Peel, Channel 4 TV interview, 1995)

The town of Glastonbury has a long association with religion, myths and legends; among them are the visit of Joseph of Arimathea, who is said to have bought the Holy Grail to Britain, the Arthurian myths, the mysteries of Glastonbury Tor, and the theories of mystical lines of force propagated in the 1960s in a series of books by author, Notting Hill landlord and International Times contributor John Michell. All this gave Glastonbury and the surrounding area special appeal for hippy seekers after truth, among them John Peel and Marc Bolan. As Peel wrote in his Sounds column, following the death of Bolan in 1977:

In the late 1960s Marc and June Child were as good friends as the Pig and I had. We climbed Glastonbury Tor together, together advanced frankly potty theories about the origins of Stonehenge as we mooned about the famed site, did most of the things that flower-children did together. (Quoted in Margrave Of The Marshes, p. 239)

It was thus a good area to stage a hippy festival. The very first Glastonbury Festival, called the Pilton Festival, took place in 1970. It was a small-scale event, with a small audience. Tyrannosaurus Rex topped the bill, so Peel may well have attended, although he didn't mention the festival in his columns in Disc & Music Echo. In the following year the Glastonbury Fair festival was staged, featuring a range of artists including David Bowie, Traffic, Fairport Convention, the Edgar Broughton Band, Gong and Hawkwind. As a product of the free festival movement, it was a reaction against the commercialisation of rock festivals in the early 1970s. It was believed (erroneously) that Peel attended the 1971 festival, which was captured on film.

In later years, Peel himself didn't seem sure of which early Glastonbury festivals he'd been to, but as he wrote in his Disc & Music Echo column of July 10, 1971, he had hoped to attend that year's festival but was unable to do so : "I regret having missed the Glastonbury festival. The fair ladies at Release tell me it was a joyful event, the local police were helpful and friendly, and the local priests who'd come to evangelicise were evangelicised...."[1]

But the Glastonbury Festival only began to be held on a regular basis in the 1980s and in the course of time became a large-scale event, attracting TV coverage first from Channel 4 and then the BBC. Peel kept his distance from the Glastonbury Festival in the 1980s, as in the intervening years he had become wary of the hippy-alternative culture which had inspired it. (In a 1977 Sounds column (reprinted in Olivetti Chronicles, pp. 119-20) he expressed his distaste after encountering, at a horse fair, a group of middle-class "Beautiful Persons" who were living the hippy lifestyle in "remote rural areas"). By this time, Peel was more likely to enjoy himself at more mainstream rock events like the Reading Festival, which he attended regularly. 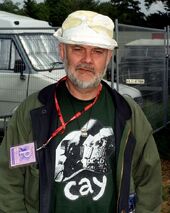 However, if Glastonbury never completely shook off its hippy idealism, then neither did Peel. In 1992, he returned to the festival for the first time in many years, describing it on air as “an utterly magical event.”[2] He subsequently attended regularly, often taking his whole family down with him. The BBC radio and TV broadcasts he presented from Glastonbury[1] came to associate him with the festival.

Many artists who made their first appearance on Peel's Radio 1 show would crop up on one of the smaller stages at Glastonbury in the same year. Acts such as Pulp, The White Stripes and David Bowie, who were championed by Peel in their early years, would later be Glastonbury graduates, topping the bill and appearing on the Pyramid Stage.

"It's very appropriate because it's all the sort of music that John would have chosen. ... He was a master at choosing the bands that were going to make it."[3]