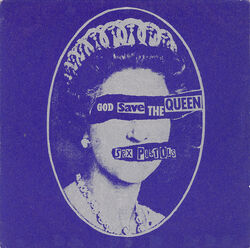 God Save The Queen is a song by the Sex Pistols. It was released on May 27 1977 as their second single and is featured on side 1 of their only studio album Never Mind The Bollocks. At the time it courted controversy as it was released around the time of Queen Elizabeth II's Silver Jubilee (although recording sessions had started as early as October 1976) and was seen as a diatribe against the monarchy: its iconic cover features the Queen with her eyes and mouth cut out. Its lyrics have often been either misquoted or taken out of context: for example, "The fascist regime / They made you a moron / A potential H-Bomb" has been interpreted as a direct attack on the Queen herself, although the band denied this. Johnny Rotten, the band's lead singer, said in the documentary The Filth And The Fury that "You don't write 'God Save The Queen' because you hate the English race, you write a song like that because you love them, and you're fed up with them being mistreated."

The original release on A&M records was swiftly withdrawn after the company fired the band, and it was reissued on Virgin with a different B-side. It was banned from airplay by the BBC, although this did not prevent it reaching number 2 in the UK charts. EveryHit.com notes that "conspiracy theory states that it sold sufficient copies to be no. 1 in w/e 11 Jun but that the chart was 'manipulated' to avoid embarrassment in the week of the jubilee. There appears to be little evidence to support this: it seems more likely to be one of many pieces of 'hype' which surrounded the band at the time." [1] The song officially stated to be number one that week was Rod Stewart's I Don't Want To Talk About It. Nonetheless, the BBC admitted in 2001 that the song had topped the charts despite their ban. [2]

Peel visibly supported the song by playing it before and after it had been dropped from Radio 1's playlists (his show went out after the 9 p.m. watershed): he saw no reason not to, as he felt it made a valid point. In his article God Save The Queen: What The Papers Say (Sounds 1977-06-18, reprinted in Olivetti Chronicles, Corgi edition, pp.151-5), he says that "their view may not be a popular view (although I challenge you to bring me a citizen who does not object to the intrusion of government into virtually every aspect of our lives), but it is a view that should be allowed to be aired," and pointed out the irony that, since the Pistols appeared to be criticising over government of the country, a blanket ban endorsed that opinion. He also drew a parallel with an earlier rock act:

"My own view is that it's a great deal of fuss about nothing. I mean, I remember in the days when the Rolling Stones first started, everybody used to think that they were outrageous, people kept going in to the papers and said that they never bathed, and that they were violent and vicious and nasty people. The great problem has been that the Sex Pistols record has come along in the middle of the Jubilee, so everybody looks like the first couple of lines of the song is a simple song which says, as I understand it anyway, that society dehumanises and it dehumanises from the top on down, and nobody escapes this, which I think is something that's well worth saying." (Unsourced contemporary audio clip, Sounds Of The 20th Century, BBC Radio 2, 2011-10-07.)

He certainly had a high regard for the song and implied that it crossed musical and stylistic boundaries, a claim he would probably think overstated in years to come:

"Regardless of whether you consider yourself a punk, a hippie, a rocker or whatever...you're going to have to face the fact - later, if not now - that the Sex Pistols record is one of the great rock records of all time...'God Save The Queen' is a devastating record - and this time I do mean 'devastating.'" (Virginity - Virgin On The Ridiculous, Sounds, 1977-06-04. Reprinted in Olivetti Chronicles, Corgi, p.431.)

JP sneaked the record into the 1977 Festive Fifty chart as a number 61, calling it "the most important 'sniggle' of the year" and suggested it could have been a joint number one with the Motors track. It subsequently appeared in five other charts, since they were composed on an all-time basis, but failed to make the cut for the very last one in 2000. That year, when Pistols manager Malcolm McLaren was in the running for Mayor of London, he irritated Peel with a spurious claim which gainsayed John's role in popularising the song:

"He repeated the old canard about 'God Save The Queen' not being played on the radio at all. Well, that's complete bollocks, because it was played at least a dozen times on these programmes." (13 January 2000)

The final repeated refrain "no future" was sampled by Rotten (John Lydon) himself on a Public Image Limited track, and the line "there is no future in England's dreaming" gave rise both to a Jon Savage book about the history of punk and a Cornershop song.

Retrieved from "https://peel.fandom.com/wiki/God_Save_The_Queen?oldid=78320"
Community content is available under CC-BY-SA unless otherwise noted.