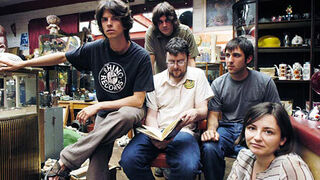 Gorky's Zygotic Mynci (pronounced 'monkey') were formed in Ysgol Bro Myrddin, Carmarthen in 1991 while the members were still in school and sang songs in English and Welsh. allmusic describe them as "sounding like a bizarrely sweet and whimsical cross between progressive rock, psychedelia, and pure pop." They have stated that their main influences are the Kinks, Fairport Convention, Richard Thompson, the Beatles, the Rolling Stones and Robert Wyatt, which chimes well with JP's own likes. [1] Their first LP, a 10" called Patio, was released on the Welsh label Ankst in 1992, but the band stubbornly resisted success and remained a cult favourite throughout their career, despite consistent Peel airplay, eight sessions and a slew of albums and singles. The latter included Patio Song, which was virtually the only one of their tunes to be regularly played on daytime radio (and it still didn't chart). However, they can claim the distinction of being the first act to play a session tune live down the line from Maida Vale (on 21 April 1996): this experiment was repeated during their fourth session. Members of the band were also part of the scratch choir that sang in the 20 December 2001 Christmas show. They split up in May 2006. Euros Childs, the main singer / songwriter of the band, said of JP in 2011:

"John Peel was very important, it’s hard to imagine us starting a band without having listened to his programme. I started listening to Peel around 1989, just before John and I started writing together. When I started listening to it my favourites were The Four Brothers from Zimbabwe, The Fall and lots of indie guitar bands." [2]

6. Live from Peel Acres. First broadcast: 20 September 2001. No repeats. (JP: 'Gorky's for a bit of a change of pace are going to be doing a death metal set tonight here at Peel Acres.')