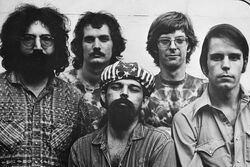 The Grateful Dead was an American rock band formed in 1965 in Palo Alto, California. The band was known for its unique and eclectic style, which fused elements of rock, folk, bluegrass, blues, reggae, country, improvisational jazz, psychedelia, and space rock, and for live performances of long musical improvisation. (...) The band and its following (Deadheads) are closely associated with the hippie movement and were seen as a form of institution in the culture of America for many years. (Read more at Wikipedia.)

The Grateful Dead were one of the major cult bands of their era. In addition to their music, they were admired for what they stood for - the hippy ethos of San Francisco, with communal living and psychedelic drug use, freedom from show-business conventions and a closeness to their audience. Yet to British observers, their image initially seemed more impressive that their records. Their first LP, issued in the UK in July 1967, was not well received, with Melody Maker's reviewer comparing it to an amateurish art college group attempting to play R&B. Although Peel obtained a copy and played in the final weeks of his Perfumed Garden, he too remarked that it was "in many ways disappointing" and he hoped for better things from their next record. This was "Anthem of the Sun", which Peel reviewed respectfully in his International Times column of 23 August 1968. At this point the Dead were less popular with Peel's audience than other West Coast bands like Love. the Doors and Country Joe & The Fish, but Peel mentioned their next album in his Disc & Music Echo column of 2 August 1969; "Hear "What's Become Of The Baby" on the Grateful Dead's "Aoxomoxoa" LP. Study the sleeve carefully, too - full of thoughts"[1]

It was only with the 1969 double LP "Live/Dead" that the band produced music which lived up to their reputation. From then on they began to be more commercially successful and to appear more frequently in Peel's playlists. They also visited the UK several times in the early 1970s and played open-air rock festivals, their loose, jamming style inspiring many British imitators. Among these festivals was the Hollywood Festival of 1970, held near Newcastle-Under-Lyme. Peel compered the second day of the event, when the Grateful Dead made their debut performance in Europe. He also played spin-off records by members of the Grateful Dead - among them tracks by the band New Riders Of The Purple Sage and from solo LPs by Jerry Garcia and Bob Weir. But by 1976 Peel was becoming more critical of the band. In Sounds (reprinted in The Olivetti Chronicles, pp.13-14) he wrote that his baby son William was unimpressed by their LP "Steal Your Face" ("He doesn't seem to care for it a lot and one can see what he means. The vocals are awful."). Peel also remarks that "it is sad to see bands, such as the Dead, who have contributed so much towards the enrichment of our musical lives, making such low-level recordings" and comments that he no longer plays records by them and similar groups on his shows because "the energy is more widely spread...and there is dandy music to be heard in all sorts of places."

Peel also commented on several occasions that his switch to punk and new wave rock was motivated by an unwillingness to repeat himself and simply play Grateful Dead records for the rest of his career. His remark highlighted how much the Dead were associated with the hippy era, which by the mid-1970s was starting to fade in the UK. In the US, things were different, and the Dead,, with their marathon live shows and networks of fans sharing live recordings (with the band's approval), became a lasting institution. As of 2014 a nationally-syndicated radio show, The Grateful Dead Hour, is still widely broadcast. But Peel seldom played tracks by the band in his later years.

Retrieved from "https://peel.fandom.com/wiki/Grateful_Dead?oldid=242472"
Community content is available under CC-BY-SA unless otherwise noted.