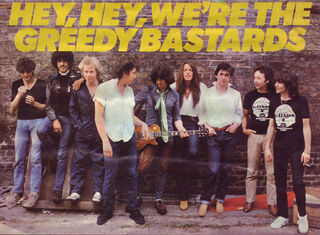 The Greedies (originally The Greedy Bastards) was a short-lived ad hoc 'supergroup' formed by Thin Lizzy frontman Phil Lynott in 1978 during a quiet spell for his main band. It grew from Lynott's interest in punk and his friendship with members of the Sex Pistols, Damned and Boomtown Rats. The subsequent rotating line-up centred around Lynott, Lizzy members Scott Gorham and Gary Moore, Chris Spedding, and Steve Jones and Paul Cook of the Pistols. This aggregation performed Lizzy, Pistols and even Stevie Wonder covers in four shows around London and three in Ireland.

Lizzy's tour of the U.S. prevented further activities until late 1979, when a recording session featuring Lynott, Cook, Jones, Gorham and Lizzy drummer Brian Downey produced the Christmas single A Merry Jingle, aired several times by Peel in the festive run-up: according to Lynott, it took them three hours to make. On the first play, JP commented: "It has to be said that Messrs. Cook and Jones really do know how to push a record along when they get down to it." [1] TV appearances helped to boost the record, which reached number 28 in the U.K. charts, but to date it has never appeared on any official Lizzy releases, was unreleased in the U.S. and was the band's only release. (The B-side, A Merry Jangle, is the A-side played backwards, as John also noted.) The band quietly imploded after this as Lynott continued with Lizzy and Cook and Jones formed the Professionals.

Retrieved from "https://peel.fandom.com/wiki/Greedies?oldid=134450"
Community content is available under CC-BY-SA unless otherwise noted.