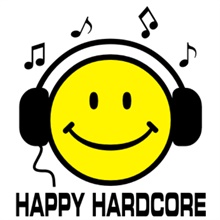 Happy Hardcore, also known as happy rave or happycore, is a genre of hard dance typified by a very fast tempo (usually around 160–180 BPM),often coupled with solo vocals and sentimental lyrics. Its characteristically 4/4 beat "happy" sound distinguishes it from most other forms of hardcore, which tend to be "darker". It is typically in a major key. In its original incarnation, it was often characterized by piano riffs, synthetic stabs and spacey effects.

The genre of music is closely related to the typically Dutch genre of gabber. Happy hardcore evolved from breakbeat hardcore around 1991–1993, as the original house music-based rave became faster and began to include breakbeats, one evolving into oldschool jungle which evolved into Drum And Bass and the other into Happy Hardcore and then UK Hardcore, which has a 'harder' style and less breakbeat. Some of the most famous artists of this genre include Scott Brown, Darren Styles, Hixxy and Sharkey.

Peel was a fan of Happy Hardcore and on his 05 February 2003 show enthused about the music:

"We're just mad for this stuff here on this programme, I have to say, because it is so much in the spirit of where popular music has been since the days of Elvis. Elvis would have understood this I think because people curl their lips at it and say it's uncool. We think it's fantastic."

Around the mid 90's, Peel started playing the music when it evolved from breakbeat hardcore, which he would often play on his shows. In 1996, Scott Brown was the first happy hardcore artist to do a Peel Session, also in the same year, listeners voted Fireworks by Happy Hardcore artists DJ Force & Styles, at number 30 in the 1996 Festive Fifty. Peel called the track the most requested record of the year and even asked DJ's to play it on Sheila's 50th birthday in 1998.

Peel's son Tom Ravenscroft as a teenager was a fan of Happy Hardcore, which Peel mentioned when broadcasting his first show from Peel Acres for BBC Radio One on 09 June 1995:

"I have to admit, I feel rather nervous about this programme, because it comes to you live and direct from Peel Acres, and our studio isn't exactly soundproof, I have to admit: it's more of a prepared corner than a studio, so you may hear the occasional extraneous noise, like a car going by on the road outside, or dogs barking, or one of the children falling downstairs or something, or most likely of all, actually, our Tom playing happy hardcore in his bedroom at the other end of the house. But hopefully there won't be too many distractions for you...This isn't some kind of Noel Edmonds fantasy either, I want you to know that."

In 2000, Peel nominated DJ Kaos' 'Hold Me Now', a Happy Hardcore track that sampled vocals from Chicago's 'Hard To Say I'm Sorry' for his Peelenium 1996.

When the music evolved into UK Hardcore in the 00's, Peel continued playing songs from that genre. On the 26 February 2002 show, Peel was so enthusiastic about the UK Hardcore artist Marc Smith vs Safe N Sound's, "Identify The Beat" track, that he played it twice, so that Mary Anne Hobbs could hear it. The track later reached number 9 in the 2002 Festive Fifty. Peel would also include the track in his mix compilation album called FabricLive.07, which was released at the end of 2002.

Many UK Hardcore tracks were popular with Peel's listeners, including some getting in the Festive Fifty such as the 2003 Festive Fifty track, "John Peel (Is Not Enough)" by CLSM, which reached number 9. The track started the campaign to get UK Hardcore music their own show on BBC Radio One, which resulted in 2005 a monthly show and then a weekly show from 2008. Many of the UK Hardcore artists including Darren Styles, Hixxy and Sharkey had session sets on Peel's show between 2003 and 2004.

In 1996, Scott Brown was the first and only Happy Hardcore artist to do a Peel Session. Through out the 00's, Peel invited Happy Hardcore (later UK Hardcore) artists Darren Styles, Hixxy and Sharkey to do mix session sets for his show between 2003 and 2004. The following artists of the genre did sessions and sets for Peel's show:

The only Happy Hardcore track to be in the Peelenium was for DJ Kaos, whose track 'Hold Me Now' was released in 1996 and used the vocal samples of Chicago's 'Hard To Say I'm Sorry'. The track entered the Peelenium 1996.

Peel played many tracks put out under the Bonkers rubric (sometimes known as Bonkerz and the Mighty Bonkers), which included one of the leading series of Happy Hardcore album compilations in the UK, released through the React label. Apart from the compilations, the Bonkers label had their own artists and released a session of Hixxy from Peel's show in 2004 on a CD called Bonkers - Hixxy Mix As Heard On The John Peel Show.

Retrieved from "https://peel.fandom.com/wiki/Happy_Hardcore?oldid=179242"
Community content is available under CC-BY-SA unless otherwise noted.