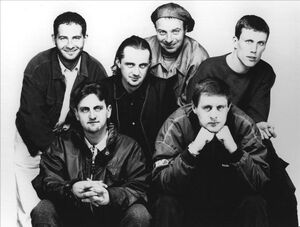 The Happy Mondays are a British indie band formed in Manchester in 1985, founded by brothers Shaun and Paul Ryder (vocals, bass), Bez ('vibes', or dancing and playing the maracas), Mark Day (guitars), Paul Davis (keyboards) and Gary Whelan (drums). They released their first album, Squirrel and G-Man Twenty Four Hour Party People Plastic Face Carnt Smile (White Out) on Factory in 1987. The band's music fused indie pop with acid house, techno and northern soul, spawning Britain's burgeoning, E-drenched Madchester scene. The Mondays disbanded in 1992, and Shaun Ryder and Bez formed Black Grape. Subsequent Mondays reunions, (in 1999 and 2004) were unsuccessful. However since 2012 the band's original members have reunited again and continue to tour. Both lead singer Shaun Ryder and Bez (Mark Berry) were renowned for their drink & drug fueled antics, and Bez's sole purpose was to dance on stage at their live gigs. When the band went to record in Barbados in the early 90's at the studio at Eddy Grant's house, which ended-up being on the album "...Yes Please!". Their managers thought it would be good to get them away from the drink/drugs scene they were surrounded by in the UK, not realizing the massive drugs problem Barbados had at the time, meaning band members were found trying to sell much of the studio equipment to continue their binge.

Peel discovered the band through Factory record label in the mid 80's: they subsequently recorded two Peel sessions (in 1986 and 1989). Peel narrated on the TV documentary Rock Family Trees: And God Created Manchester, the subject of which was the Madchester scene: the Mondays featured on the show. Their biggest chart successes featured in four Festive Fifty entries, and JP saw them live, commenting on their rather fearsome retinue. During the period of their greatest chart success, he was prone to playing some of their earliest recordings on BFBS, sardonically promoting them as a cheat for those who wished to pretend they had liked the band all the time. They disbanded for the first time in 1992 as a result of the failed LP Yes Please!, which is credited with bankrupting Factory Records. Shaun Ryder and Bez united with members of Ruthless Rap Assassins and Paris Angels to form Black Grape. The Mondays reformed in 1999 and went on tour supporting Oasis but split again the following year.

Retrieved from "https://peel.fandom.com/wiki/Happy_Mondays?oldid=241311"
Community content is available under CC-BY-SA unless otherwise noted.