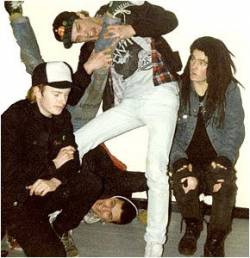 "That's Heresy and Into The Grey, or as they call it, BLEEEAAARRRGH!" [1]

Heresy were a hardcore punk band from Nottingham, England, formed in 1985. They released three albums and are credited as both one of the key bands in the late 1980s UK hardcore scene, and one of the original grindcore bands. The band was formed by Reevsy (guitar, vocals), Kalvin "Kalv" Piper (bass), and Steve Charlesworth (drums), the first two having previously been in the Stoke-on-Trent band Plasmid. Their first release was the 1986 6-track flexi-disc Never Healed - the first release on Earache Records, which was followed by a split LP with Concrete Sox. They then added a singer, who was soon replaced by Concrete Sox drummer John March. Reevsy left the band to be replaced by Mitch Dickinson from Unseen Terror on guitar. The band toured through Europe with this line-up.

In 1988, Mitch left the band, to be replaced by Baz from Ripcord, the new line-up recording the Face Up to It LP. The band's final album, 1989's 13 Rocking Anthems, was compiled from their last two Peel Sessions. The band split up in late 1988. Members Steve and Kalv formed Meatfly, and now play in UK hardcore band Geriatric Unit.

Apart from repeated play over their active years, the band recorded three Peel sessions. Peel saw Heresy live at the 1 in 12 Club in Bradford two weeks before their debut session, and described them as "awe-inspiring". On playing a track from their LP Face Up To It!!!, he mentioned that the band were not thrilled with the sound, since it resembled being recorded over the phone. [2]

Retrieved from "https://peel.fandom.com/wiki/Heresy?oldid=236558"
Community content is available under CC-BY-SA unless otherwise noted.