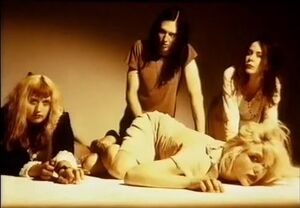 Hole was an American alternative rock band that formed in Los Angeles, California in 1989. The band was fronted by vocalist, lyricist, and rhythm guitarist Courtney Love (widow of Kurt Cobain, singer of Nirvana), who formed Hole with lead guitarist Eric Erlandson. Hole had a revolving line-up of bassists and drummers, their most prolific being drummer Patty Schemel, and bassists Kristen Pfaff and Melissa Auf der Maur. Hole achieved considerable commercial and critical success throughout the 1990s, initially releasing singles through independent labels.  The group officially disbanded in 2002 and its members began solo careers and other projects. In 2009, Love announced she was reforming Hole as the sole returning member. In November 2012, however, Love stated on her Twitter account that she was working now under her own name as a solo artist, and that "Hole is dead". In April 2014, Love confirmed that she had been rehearsing new material with Hole's founding lead guitarist Eric Erlandson, as well as former bandmates Melissa Auf der Maur and Patty Schemel, and that a reunion of the band was being planned.

Peel was a fan of riot girl acts such as Babes in Toyland, who Courtney Love, the singer of Hole, was once a member of. Hole were first played on Peel's show in the summer of 1990 and were invited for a couple of sessions on his show. Their Live Through This album was voted by Peel as his Top 20 Albums. In 1993, Peel mentioned that the band was the best at the Phoenix Festival on 02 August 1993 (Ö3):

"The best set I thought (I couldn't see them all because I had to spend the entire time on the main stage and four of my alternative stages as well, which had on a lot of the bands that I wanted to see), but on the main stage and by some distance the best set came from Hole, perhaps rather surprisingly, because they've come in for a lot of criticism over the past few years, really I suppose because Courtney Love married Kurt Cobain... but as a band they really cared about what they were doing and their set at the Phoenix Festival was especially good."

Also at the Reading Festival, he described the band on 25 August 1995:

"I think you have to say that once again the highlight of the day at the Reading Festival, in spite of all the other extraordinary things hat have gone on, was the performance by Hole. I was backstage when Courtney Love arrived, obviously the centre of attention. It was all American, in fact, backstage: the only thing you heard spoken was American. Courtney arrived in a London taxi...which was kind of a dramatic entrance to what you'd normally expect. I have to say when she got out of the taxi she was staggering slightly and sort of supported by security people...disappeared into a van somewhere, but then came back out and went onto the stage, and it was yet another, as with last year, another absolutely electrifying performance. The thing about Hole, as far as I'm concerned...they can be alarming, disconcerting, they can be embarrassing at times, but you want to see and hear every second of it."

Retrieved from "https://peel.fandom.com/wiki/Hole?oldid=226937"
Community content is available under CC-BY-SA unless otherwise noted.