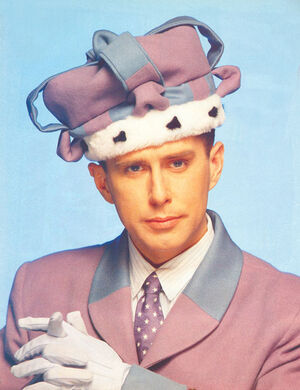 Holly Johnson (born William Johnson; 9 February 1960; legal name William Holly Johnson) is an English artist, musician and writer, best known as the lead vocalist of Frankie Goes to Hollywood, who achieved huge commercial success in the mid-1980s. Prior to that, in the late 1970s he was a bassist for the band Big In Japan and before that, he had a very short solo music career under the name of Holly, where he released two singles between 1979 and 1980. In 1989, Johnson's debut solo album, Blast, reached number one in the UK albums chart. Two singles from the album, "Love Train" and "Americanos" reached the top 5 of the UK Singles Chart. In the 1990s he embarked on a painting career. (more on wikipedia)

Holly Johnson's solo music career from 1989 was very pop oriented and wasn't the type of music that Peel would play, although he did include "Love Train" in his show of 02 January 1989. In May 1997, after Peel compered the Hillsborough Justice Campaign Concert, he named Johnson singing a cover of Gerry & The Pacemakers' "Ferry Across The Mersey" as one of the highlights of the event [1] and played the Frankie Goes To Hollywood version of the song.

Retrieved from "https://peel.fandom.com/wiki/Holly_Johnson?oldid=135422"
Community content is available under CC-BY-SA unless otherwise noted.