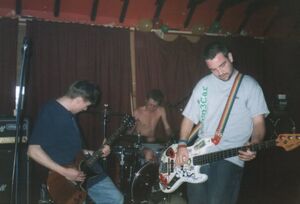 The band's third session was recorded just after a week's touring in Japan. It included a song John regarded as his personal favourite of the band's output, Danny, which he suggested may have been recorded with him in mind, given his fanatical support of it on its release in 1995. (John sent a spare copy of the single to one lucky listener to BFBS, and his own turned up in John Peel's Record Box.)

The band split up in 1998, and Peel read out on air a note attached to a copy of their final CD, ...By Means Of Maybe:

This is the last thing that the band's going to do: it's come to the point for the amicable split, but we've really enjoyed it, especially doing the sessions for you, so thanks again for your support over the years, and thanks too to Alison for all her patience in dealing with us when booking or re-booking sessions." [1]

Shortly afterwards, on 01 July 1998 (BFBS), John related his experiences at two gigs of theirs. One was in Salcombe with a TV crew, and the other their last ever at a studio facility in Hartlepool. In 2003, he also gave airtime to a retrospective double CD which claimed to contain their complete recordings, but omitted the sessions, which remain unreleased.

(JP: 'I think that is such a great record, and I seem to be alone in thinking so.')

Retrieved from "https://peel.fandom.com/wiki/Hooton_3_Car?oldid=256015"
Community content is available under CC-BY-SA unless otherwise noted.