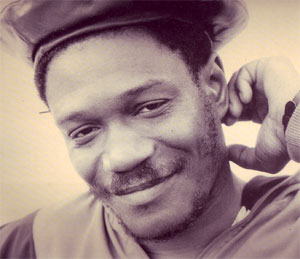 Horace Andy (born Horace Hinds, 19 February 1951) is a Jamaican roots reggae songwriter and singer, known for his distinctive vocals and hit songs such as "Government Land", as well as "Angel", "Spying Glass" and "Five Man Army" with English trip hop duo Massive Attack. He is also famous for a cover version of "Ain't No Sunshine". Andy is often described as one of the most respected and influential singers in Jamaica.

In 1977, Andy moved to Hartford, Connecticut, with his first wife, Claudette, where he recorded for Everton DaSilva, including the In The Light album and its associated dub album, and singles such as "Do You Love My Music" and "Government Land". Andy set up his own Rhythm label, which became an outlet for his work with DaSilva. The association with the producer was brought to an abrupt end when DaSilva was murdered in 1979. Andy's 1978 album Pure Ranking had anticipated the rise of dancehall reggae, and he was a key figure in the early development of the genre, confirmed by 1982's Dance Hall Style album. Andy continued to record with a variety of producers in the first half of the 1980s. In 1985, with his second wife Caroline, he relocated to Ladbroke Grove, London, and he recorded in the United Kingdom as well as regularly visiting Jamaica for further recording work....(Read more)

Andy is a Rastafarian. Some of his lyrics have been criticized as being homophobic. Andy stated that Trojan Records only agreed to release his album On Tour after removing a track containing the lyrics, "The Father never make Adam and Steve, he make Adam and Eve". He began a lasting collaboration with Bristol group Massive Attack, guesting on all five of their albums. AllMusic adds, "(He is) blessed with one of the most distinctive voices on the island and his emotive delivery just adds further weight to his reputation. His classic recordings from the '70s remain crucial listening."

John played Andy's music from the late 70s until the end of his life (indeed, the quintessential Skylarkin featured in JP's final show).

Retrieved from "https://peel.fandom.com/wiki/Horace_Andy?oldid=221761"
Community content is available under CC-BY-SA unless otherwise noted.