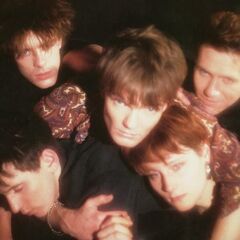 House Of Love are an English alternative rock band. Formed in 1986, the band rose to prominence in the UK as a leading indie rock band in 1988 and split up in 1993, eventually reforming a decade later in 2003. The band is best known for its detailed psychedelic guitar sound and for the successful singles "Shine On", "Christine" and "Destroy the Heart". The band took its name from Anaïs Nin's book A Spy in the House of Love.... (more on Wikipedia)

The band did six sessions for Peel's show and had four Festive Fifty entries, including the 1988 number one, ‘Destroy The Heart’. The band also played a live set at Peel's 50th birthday celebration, broadcast on 30 August 1989, with the Fall and Wedding Present, as a late substitute for a reformed Undertones, who had been due to play a one-off gig to mark the occasion. On 14 June 1988, Peel suggested that he rated House Of Love most highly as a live act:

"The House of Love. The odyssey of live. Somehow their records are fine, but they're better live."

The DJ appears to have been won over by the band when he saw them at Leeds Irish Center in May 1988.[1] In his review for The Observer, he wrote:

“The House of Love showed within seconds that they have that inner tension that makes for a great rather than a merely good band. This was one of those rare performances that I wished I could have taken away with me."[2]

In a 2013 interview for the same paper, singer Guy Chadwick recalled the effect of Peel’s change of heart:

“It was fantastic. And the reason it was so good was that he started playing the record on the radio. Things really did change then – he was playing a track every night for weeks."[3]

Peel long viewed the Leeds gig as a personal highlight. On his 16 May 1997 (BFBS), he recalled:

"One of the great gigs, actually ... they were magnificent. I thought, 'This band is going to dominate the world.' Well, they made a good go at it, you know, but didn't get quite as far as that, obviously."

Retrieved from "https://peel.fandom.com/wiki/House_Of_Love?oldid=273689"
Community content is available under CC-BY-SA unless otherwise noted.