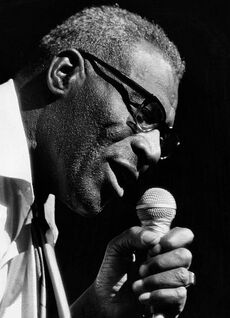 Chester Arthur Burnett (June 10, 1910 – January 10, 1976), known as Howlin' Wolf, was an influential American blues singer, guitarist and harmonica player. He was born in West Point, Mississippi, in an area now known as White Station. With a booming voice and looming physical presence, Burnett is commonly ranked among the leading performers in electric blues; musician and critic Cub Koda declared, "no one could match Howlin' Wolf for the singular ability to rock the house down to the foundation while simultaneously scaring its patrons out of its wits". A number of songs written or popularized by Burnett—such as "Smokestack Lightnin'", "Back Door Man", "Killing Floor" and "Spoonful"—have become blues and blues rock standards. He was a large man and had an imposing presence, with one of the loudest and most memorable voices of all the "classic" 1950s Chicago blues singers. (Read more at Wikipedia.)

Howlin' Wolf was one of those "wild men of the blues" who were lifetime favourites of John Peel. Although his records did not make the US pop charts when Peel was living and working in the States, he was rediscovered by American listeners thanks to the Rolling Stones, one of the many 1960s British groups who had been inspired by him. When Peel returned to Britain, he had to borrow a Wolf LP to play on the Perfumed Garden, as the singer's records were not available on the Radio London ship. The album was supplied by Peter Shertser, leader of "psychedelic pranksters" and blues fans The Firm, who Peel had met at the UFO club during his shore leave. Shertser was later to run the blues reissue label Red Lightnin' Records.

In addition to his own recordings, Howlin' Wolf was influential on other Peel favourites, notably Captain Beefheart, whose vocals and harmonica style bears a strong resemblance to Howlin' Wolf's, particularly on the LP "Safe As Milk" which was such an important part of Peel's 1967-68 playlists. Wolf's songs were also recorded by The Doors ("Back Door Man" on their first LP) and the most memorable track by Mike Bloomfield's short-lived band The Electric Flag was their version of Wolf's "Killing Floor".

In the late 1960s, Chess Records attempted to cash in on Howlin' Wolf's popularity with rock musicians by having him record a "psychedelic blues" album. Wolf himself hated this release, but Peel played a few tracks from it. The singer's collaborations with white blues-rock musicians in the early 1970s were warmly received, but in his later playlists Peel favoured the classic tracks for which Wolf is best remembered.

On 21 April 2004, Peel recalled seeing the artist play in London mostly likely in the late Sixties or very early Seventies:

"It was a fantastically disappointing night. I went along with Peter Green who used to be in Fleetwood Mac and was an amazing guitar player and a really nice bloke. We went along to see him play at this kind of trendy club just around the corner from the BBC called the Speakeasy. He'd obviously been playing I think for too long for kind of, white college audiences and things, and he did a kind of Amos 'n' Andy routine which... made you feel really uncomfortable. He was really kind of mugging it up for the white folks. Peter Green actually I seem to remember was in tears by the end of it and I wasn't far off. It was really very depressing indeed."

Retrieved from "https://peel.fandom.com/wiki/Howlin%27_Wolf?oldid=255920"
Community content is available under CC-BY-SA unless otherwise noted.