(This page refers to the Liverpool and Wales footballer. For the Peel session band of the same name, see Ian Rush(2).) 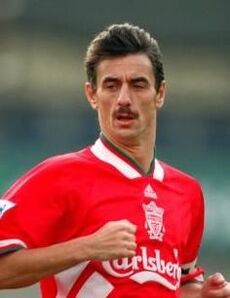 Ian James Rush, MBE, (born 20 October 1961 in St Asaph, Wales) is a Welsh former footballer. Rush played for Liverpool F.C. from 1980-1987 and 1988-1996, and is the club's all-time leading goalscorer, having scored a total of 346 goals in all competitions during his two spells at the club. Regarded as one of the greatest-ever Liverpool players, Rush came 3rd in the "100 Players Who Shook The Kop" – an official Liverpool fan poll.[1]

Rush also had short spells playing at Chester City, Juventus, Leeds United, Newcastle United, Sheffield United, Wrexham and Sydney Olympic. He made 73 appearances for the Wales national football team and he remains the record goalscorer for Wales with 28 goals between 1980 and 1996. Since retiring as a player in 2000, Rush has had a stint as manager of Chester City (2004–05), and has worked as a television football pundit. (Read more at Wikipedia.)

"One of these days you're going to be very pleased to be able to tell your grandchildren that you saw Ian Rush play, because he's a great footballer."
(John Peel, 18 November 1981)

Ian Rush was Peel's choice when he was offered the chance to pick his own guest to interview for the Chain Reaction series on BBC Radio 5 in 1993; in the previous programme, Peel had himself been interviewed by David Gedge of the Wedding Present.[1] Explaining his reasons for selecting the footballer, the DJ mentioned growing up as a Liverpool fan and also that all four of his children had names with references to the Anfield club[2]:

"And I have always said, and this is true, that if we had a fifth child, the name Rush would come into it. So when I was asked to interview someone who I would wish to interview, I asked Ian Rush to come down, and he has done this."[3].

Rush was the former Liverpool strike partner of Kenny Dalglish, Peel's all-time favourite player,[4] and obviously remained high on the DJ's list of footballing heroes. During the interview, Peel described Rush appearing on the show as a “great honour” and admitted that he hadn’t been able to sleep the night before.

The following year, Peel was quick to book a session with a Welsh indie band who had named themselves after the Liverpool and Wales striker.[5]

Rush himself would appear on the Peel wingding as part of the chorus on the Liverpool F.C. (& The Boot Room Boyz) single‎ 'Pass & Move (It's The Liverpool Groove)', released ahead of the 1996 FA Cup final.[6] He was also mentioned in the lyrics: "Rushie's scored more than all the rest / Respect to the lad…"

"'Best football record in the history of the world ever?" pondered Peel. "Very possibly."[2]

In later years, with the team in decline, Peel came to miss the glory days of Liverpool, commenting on 22 April 2004:

"You don't feel nearly as involved as you used to. Obviously somebody like Kenny Dalglish, we adored, didn't we? And Ian Rush and all of those people ..."

Retrieved from "https://peel.fandom.com/wiki/Ian_Rush?oldid=147334"
Community content is available under CC-BY-SA unless otherwise noted.