(This page refers to the Peel session band from Wales. For the Liverpool footballer of the same name, see Ian Rush.) 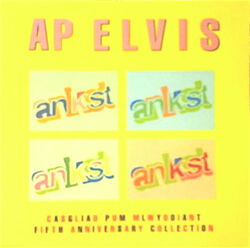 Ian Rush were a Welsh-language indie band from Mold, north Wales, who attracted some attention by naming themselves after the all-time top goalscorer for both Liverpool and the Welsh national team. They played their first gig in 1991.[1]

After over a decade of silence, the band reconvened in 2007 for a comeback live appearance at the National Eisteddfod. [4] [5] [6]

Bowing to the inevitable, avid Liverpool fan Peel introduced the band’s song on “Ap Elvis” for the first time on his show of 29 May 1993:

"Something which I’ve always hoped to be able to say to you: this is a record by Ian Rush."

Despite his regular support for Welsh-language music, the DJ admitted that his positive reaction to the band's debut effort was perhaps predictable:

“The notes that come with it, the press release, say, ‘Another new band, this time sporting a moniker that should guarantee an airing on the John Peel show, if nothing else.’ And I suppose there’s a measure of truth to that. I would probably be less enthusiastic about playing the track if they had been called Mark Hughes.”[1]

Nevertheless, 'Dal Heb Fy Nal' would enjoy more airings on the Peel wingding than any of the other contributions to "Ap Elvis".[2] The DJ was also quick to consider booking the newcomers for a session, while acknowledging that his decision could well be influenced by their inspired choice of name:

“Perhaps we ought to get Ian Rush in for a session. I’d quite like that because, well, I’d just like to hear people saying during the daytime, ‘And on John Peel’s programme tonight, a session from Ian Rush’.”[7]

The proposed session did go ahead, but little more was heard from the Welsh outfit in Peel’s lifetime. In early 1994, though, “Brian” from the band (presumably Pete Bryon) appeared on the show as a guest reviewer of that day’s match between Cardiff and Manchester City.[3] (Cardiff won 1-0.)

One session. No known commercial release.

Retrieved from "https://peel.fandom.com/wiki/Ian_Rush(2)?oldid=236603"
Community content is available under CC-BY-SA unless otherwise noted.