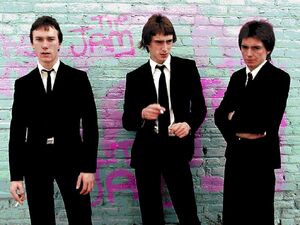 The Jam were an English mod revival band active during the late 1970s and early 1980s. They were formed in Woking, Surrey. While they shared the "angry young men" outlook and fast tempos of their punk rock contemporaries, The Jam wore smartly tailored suits rather than ripped clothes, and they incorporated a number of mainstream 1960s rock and R&B influences rather than rejecting them, placing The Jam at the forefront of the mod revival movement.

They had 18 consecutive Top 40 singles in the United Kingdom, from their debut in 1977 to their break-up in December 1982, including four number one hits. As of 2007, "That's Entertainment" and "Just Who Is the 5 O'Clock Hero?" remained the best-selling import singles of all time in the UK. They released one live album and six studio albums, the last of which, The Gift, hit number one on the UK album charts. When the group split up, their first 15 singles were re-released and all placed within the top 100.

The band drew upon a variety of stylistic influences over the course of their career, including 1960s beat music, soul, rhythm and blues and psychedelic rock, as well as 1970s punk and new wave. The trio was known for its melodic pop songs, its distinctly English flavour and its mod image. The band launched the career of Paul Weller, who went on to form The Style Council and later had a successful solo career. Weller wrote and sang most of The Jam’s original compositions, and he played lead guitar, using a Rickenbacker. Bruce Foxton provided backing vocals and prominent basslines, which were the foundation of many of the band’s songs, including the hits "Down in the Tube Station at Midnight", "The Eton Rifles", "Going Underground" and "Town Called Malice"....(read more at Wikipedia)

It is said that Peel played the LP This Is The Modern World in its entirety [1]: however, no trace can be found of him doing so (although he did play three tracks from it on 27 October 1977) and this is probably another Internet urban legend. What is certain, however, is that he first saw them live at the Reading Festival in 1978 and confessed to being "a trifle disappointed", although he admits that he may have been expecting too much from them, and in any case Paul Weller was so unhappy with the band's sound he trashed some of the stage equipment after accusations of being "stitched up". [2]

The band achieved fifteen Festive Fifty entries, although, since this was in the era of the all-time chart, most of them are with the same tracks. Interestingly, their first entry was with an album track, Away From The Numbers, in JP's self-chosen 1977 Festive Fifty. This is a medium-paced track in which Weller speaks of his desire not to be just like his hometown forebears, a theme he would return to (for example in A Town Called Malice). Another common Jam theme, that of suffering violent attacks (or as Peel put it, "getting thumped"), was subject matter for some of their most popular songs. The record Peel judged to be their best, Eton Rifles, just about scraped the top 20 in 1979 and dropped from view thereafter: conversely, Down In The Tube Station At Midnight (revived by Peel with a favourable comment during his stint on Jakki Brambles' show) charted five times and Going Underground was their only track to make the final all-time 50 in 2000.

Peel applauded Weller's decision to dissolve the act in 1982 when they were still at the peak of their commercial success, even though Paul went on to form the Style Council, whose jazzy melodicism featured on David Jensen's shows rather than his:

"In a way I'd rather people did that than banging out the same stuff. I thought it was brave of Paul Weller to split up The Jam and pursue other things." [3]

Retrieved from "https://peel.fandom.com/wiki/Jam?oldid=254484"
Community content is available under CC-BY-SA unless otherwise noted.