"I once outraged John Walters by telling him that the kind of jazz that I liked was really the kind of thing that you'd see in black and white pictures when the villains all pour into their old DeSoto, or whatever it happens to be, and they switch on the radio and that sort of fast, hot music comes whipping out." (John Peel, 05 August 1994)

"I remember buying that record when I was a kid and thinking it was fantastically cool because all of my friends hated it." (Peel on "The Golden Striker" by the Modern Jazz Quartet, 18 April 2002)

From jazz magazines to living in a shed 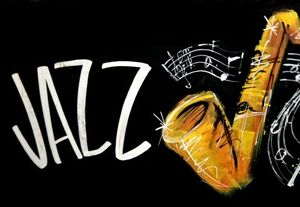 Jazz music never played a major role in John Peel's programmes, but he began buying records in the pre-rock-and-roll era of the mid-1950s, when jazz was the music which appealed to rebellious, non-conformist youth, and something of its influence stayed with him. Much of his early musical knowledge came from magazines:

"Jazz I knew about because at the station I used to buy Jazz Journal and Jazz Monthly ... They were the only publications that I saw regularly that were about music, so I used to buy them and I knew all of the names."[1]

Although he cites early rock'n'roll, particularly Little Richard, Gene Vincent and Elvis Presley, as the seminal listening experience which endured for the rest of his life, he also became a blues enthusiast, buying albums from specialist jazz record shops like Dobell's of London. His favourite British artist of the era, Lonnie Donegan, was a member of Ken Colyer and Chris Barber's jazz bands before achieving chart success with his skiffle group.[2]

Peel began his career in the early 1960s as a guest "expert" on a specialist rhythm and blues programme, Kat's Karavan, on a Dallas radio station (WRR) which also played jazz and easy listening music ("the words 'Les Brown and his Band of Renown' leap unbidden into my mind", Margrave of the Marshes, p.151); he recalled on a 2002 show that one of the artists played regularly on the show was the jazz organist Jimmy Smith.[3] Sheila Ravenscroft recounts how jazz records became a part of his lifestyle:

In the early 1960s, John lived on Potomac Avenue, Dallas, the sole occupant of a wooden shed that had formerly served as servants' quarters - possibly even slaves' quarters - at the bottom of somebody's garden. In the evenings, spurred on by the Playboy philosophy that what women wanted was a sophisticated fellow who drank bourbon, drove a Maserati and listened to jazz, he sat on his bed and tried terribly hard to like records by Dave Brubeck and Shelly Manne and His Men, purchased from the Columbia Reord Club. His economic plight meant that the bourbon and the Maserati would have to wait.... [4]

Jazz did not appear in Peel's later radio programmes in the US, as he was able to find employment as a "Beatles expert" at another Dallas station (KLIF) whose pop orientation was more to his taste. He worked for other stations with a Top 40 format (KOMA, Oklahoma City; KMEN, San Bernardino) until his return to Britain in 1967. Jazz lost much of its audience in this period, seeming either middle-aged and irrelevant or dauntingly experimental to the young listening public attracted by post-Beatles pop. The Perfumed Garden only featured the occasional jazz record, jazz was absent from the pop and rock oriented Top Gear but was a part of the eclectic mix of Night Ride, one edition of which included Louis Armstrong's "Struttin' With Some Barbecue".[5] His favourite Modern Jazz Quartet track, "The Golden Striker", was played regularly by Jon Curle on his half of the Wednesday Night Ride - as part of a film soundtrack it was a "non-needletime" item.

In the late 1960s some contemporary jazz musicians were respected by the Underground circles in which Peel moved, notably Charles Mingus, Thelonious Monk and the avant-gardists who won an audience in the wake of John Coltrane's late work, such as Sun Ra, Albert Ayler and Ornette Coleman - who was a major musical influence on Peel's all-time favourite, Captain Beefheart. In February 1968 Peel attended a Coleman concert at the Royal Albert Hall - advertised as a classical music performance in order to circumvent Musicians' Union restrictions on US musicians - but confessed to Melody Maker that he had difficulty in engaging with the music.[6] At the same time, various kinds of jazz "fusions" appeared, from the folk-jazz of Pentangle to the jazz-rock of bands like Colosseum and Blodwyn Pig. Peel preferred to concentrate on these developments, aware that the BBC's jazz programmes (hosted by Humphrey Lyttleton and Peter Clayton, broadcasters he greatly admired) gave exposure to "pure" modern jazz, much of which was, as he admitted, not to his taste.

The first half of the 1970s saw an increase in the amount of jazz-related music on Peel's programmes. This may well have been due to the influence of his producers, contemporary jazz enthusiast John F. Muir and John Walters, who combined a love of jazz with a critical attitude to "progressive rock", which he and Peel saw as increasingly commercialised and formulaic. In this period, contemporary British jazz groups such as the Keith Tippett Group, Ian Carr's Nucleus, Chris McGregor's Brotherhood of Breath and Back Door did sessions for Peel (as did - improbably - George Melly). These groups recorded for "progressive" record labels (Vertigo, Deram, RCA Neon) and added elements of rock and pop to their music. There was a session by free improvisers The Amazing Band in 1970; they were defended by Walters but, as Ken Garner notes in The Peel Sessions (p.252), were failed by the BBC audition panel ("Pretentious....boring...a musical confidence trick...rubbish of the first order"). A further session of free improvisation, planned by Walters and involving two chimpanzees, did not come to fruition.[2]

The jazz-influenced Soft Machine had been underground stalwarts and Peel session regulars in the late 1960s; their drummer Robert Wyatt became a long-term Peel favourite, firstly with his early '70s band Matching Mole and then as a solo artist. Saxophonist Lol Coxhill, a free improviser and busker, performed with Kevin Ayers and the Whole World and was signed to Peel's Dandelion Records, recording a double album, Ear of the Beholder. In contrast, the ragtime revival of the early 70s and the rediscovery of Scott Joplin's music were reflected in Peel's enthusiasm for Beaver and Krause's synthesizer-based version of Joplin's "A Real Slow Drag" (released as a single in 1973) and a session by pianist Joshua Rifkin.

Peel later referred to the mid '70s as a "fallow period", preceding the punk explosion. The BBC, faced with serious financial problems, reduced Peel's hours and terminated Radio 1's other "progressive" programmes. Top Gear ended in September 1975 and was replaced by a nightly show, presented by Peel from 11 p.m. to midnight and often featuring extensive previews of a wide range of new albums. Among them were some jazz items; whole sides of Miles Davis's "Agharta" (1975) and Keith Jarrett's "Köln Concert" (1976) were played, and Michael Mantler's setting of Edward Gorey's "The Hapless Child" became a Peel favourite - possibly because of Robert Wyatt's narration. The onset of punk concentrated Peel's attention for a time, but nevertheless the show of 21 December 1977, featuring the best sessions of the year, included one by John McLaughlin's Indian-jazz fusion band Shakti - all the other sessions selected were by "New Wave" bands.

Peel's main focus continued to be on new music from new artists, but most of his shows contained older records of various kinds - often rock'n'roll, blues or rhythm and blues. The jazz styles he liked best were close to these popular traditions; he seemed to have little time for the more cerebral or abstract forms of the music. The Peel's Pleasures series of 1981 and 1982 provided him with the opportunity to play some non-current items from his collection, including early jazz, ragtime and dance band recordings from the first three decades of the twentieth century. By 1984-85 more jazz records were appearing in his programmes, from Bix Beiderbecke and Duke Ellington to Coleman Hawkins, Art Pepper, Sonny Rollins and the Modern Jazz Quartet - perhaps reflecting a renewed awareness of, and respect for, the jazz tradition after the demise of 1970s jazz-rock. In some respects this was a "retro" movement, with figures such as Billie Holiday, Miles Davis and Chet Baker being regarded as style icons as much as major musical figures, but it did represent an alternative to the witless mainstream pop-rock of the 1980s and also suited Peel's tendency to revisit the music he had heard - or missed out on - in his youth. As he told Andy Peebles on the My Top Ten programme he did in 1984:

And I’ve also been playing one or two old jazz records, because they were things that existed during my lifetime or issued during my lifetime but which I had never previously heard – so that’s quite exciting. And I do occasionally like – I mean, it is a bit self-indulgent – but I do like to put a few of my old favourites from that era in, because I know that the majority of the people that listen to the programme probably won’t have heard them before either or won’t know them terribly well. And I think it is useful – I mean, I try and play as much modern music as is possible, but the occasional reference point from the past I think is quite useful as well. Something that helps you identify with things that are going on now.[3]

It was in the final five years of Peel's programmes when jazz records were featured regularly in his playlists. This began with the Peelenium, which traced the development of popular music from the beginning of the twentieth century, with the first jazz record by the Original Dixieland Jazz Band being one of the selections from 1917. Tracks by most of the music's major figures, from the 1920s through the swing era of the '30s to the post-war years, appeared, but after 1950, only Chris Barber and His Jazz Band (1955) and the Modern Jazz Quartet (1957) occur in the listings. This would seem to provide evidence for the contention that Peel preferred earlier forms of jazz, as would the many jazz records, often by popular bandleaders such as Duke Ellington, Benny Goodman and Tommy Dorsey, which appeared (alongside dance bands, music-hall, pop songs and rhythm and blues) in the subsequent Pig's Big 78 spot in his programmes.

Yet despite the wide range of challenging music in Peel's post-1999 shows, there were no sessions by contemporary jazz artists, however, on March 2001 (FSK), Peel revealed trying to get Ornette Coleman (see above) to do a session, although without much success. He also mentioned on the show that he wasn't much of a jazz fan, but in his teenage years, he had been into trad jazz, yet modern jazz passed him by, except for the work of one or two people - including Ornette Coleman. Clearly his tastes had evolved since the 1968 Coleman concert. Indeed, in Margrave of the Marshes he mentions "as a service to aspiring musicians, a list of things not to write in any press release you might be planning to include with your demos"':